The delicate flow of its movement, its range of explosive colours charged with energy, its aesthetics and style breaking like waves with the limits established until now... All this is the new TAG Heuer Aquaracer model, a sports watch with classic roots and a new face that leaves traces of saltpetre in the heart.

Made with the sea always in mind, the TAG Heuer Aquaracer has been with us since 1978, although it wasn't known by that name back then, as the legacy began with the Heuer Ref. 844. That portentous model was the beginning of the successful Swiss luxury brand's diving watch legacy, although TAG Heuer had patented the first water-resistant cases for pocket watches as early as 1895.

Over the years we have enjoyed every innovation from TAG Heuer, the watchmaker founded in 1860 by Edouard Heuer, and waited with great excitement for the launch of a new Aquaracer. Of course, we've often thought that the latest model could never be surpassed, but we were quite wrong.

Like the ocean, the TAG Heuer Aquaracer is always evolving. Indeed, it is synonymous with the ocean itself, and while it is a timeless and reliable timepiece for any occasion, from its bracelet to its case to its hands, it speaks of the crests of the waves, of the exact moment when you dive in and cross the sea surface barrier after a jump, or of all the secrets that the depths hold.

Since its conception, it has been forged to explore the depths of the ocean, so that divers can count on the best companion of all time, and so that sea lovers know that they are not alone in their adventures. But despite its aquatic soul, the new Aquaracer goes beyond the limits and is adaptable to any terrain. 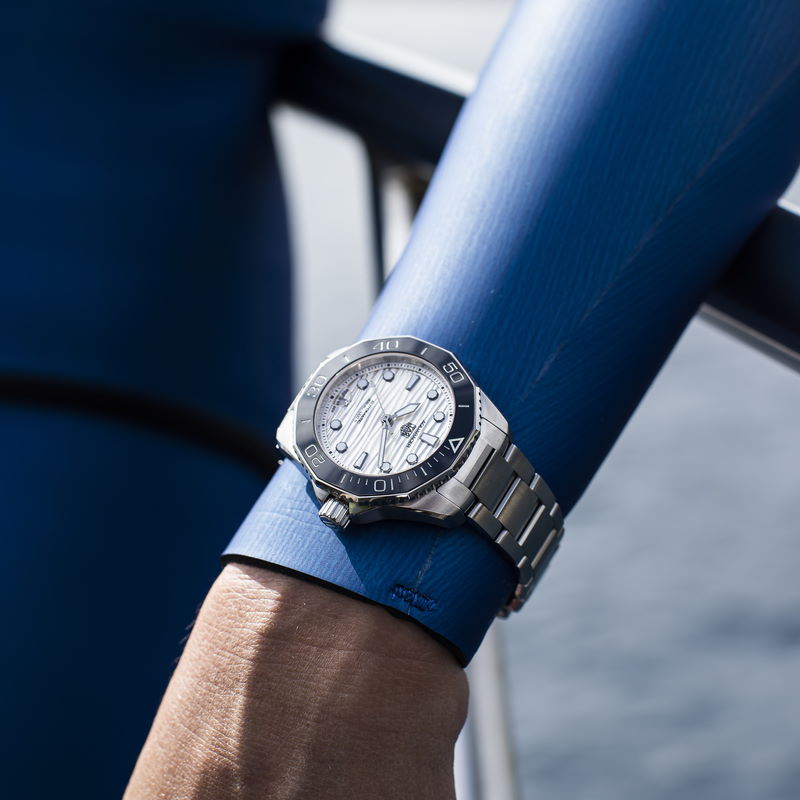 At sea, in the mountains, on the back of a horse or behind the wheel of a sports car, it doesn't matter, the Aquaracer is more than ready and is today the quintessential tool watch that redefines the meaning of luxury timekeeping. Versatile is an understatement, and with enviably renewed energy, the new model is called the TAG Heuer Aquaracer Professional 300 and is here to win over anyone who loves an active life, values style, and seeks to better themselves day after day. 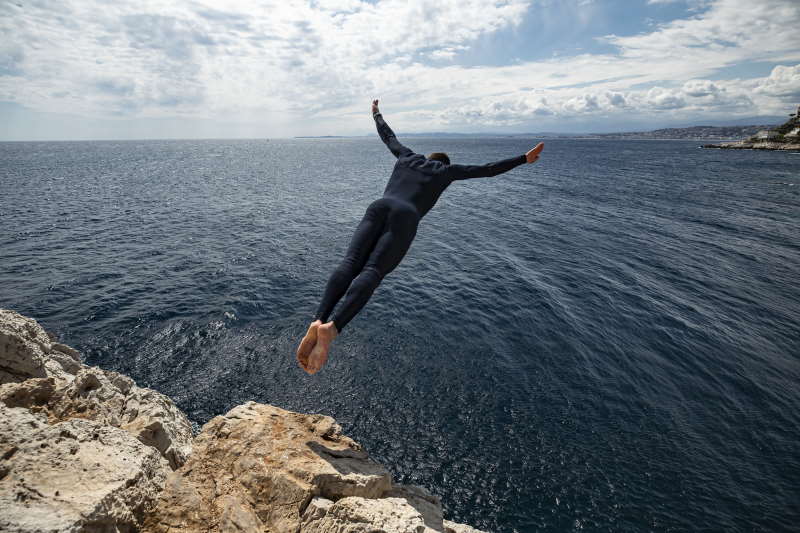 With a dazzling new look and unrivalled ruggedness, the model is tailor-made for the new generation of 21st century 'explorers' without losing sight of the most classic and unmistakable features of the first-ever Aquaracer. Elegant, bold and exquisitely functional, it has become in just a few months one of TAG Heuer's great masterpieces of watchmaking engineering, perfectly embodying its courageous and avant-garde spirit. 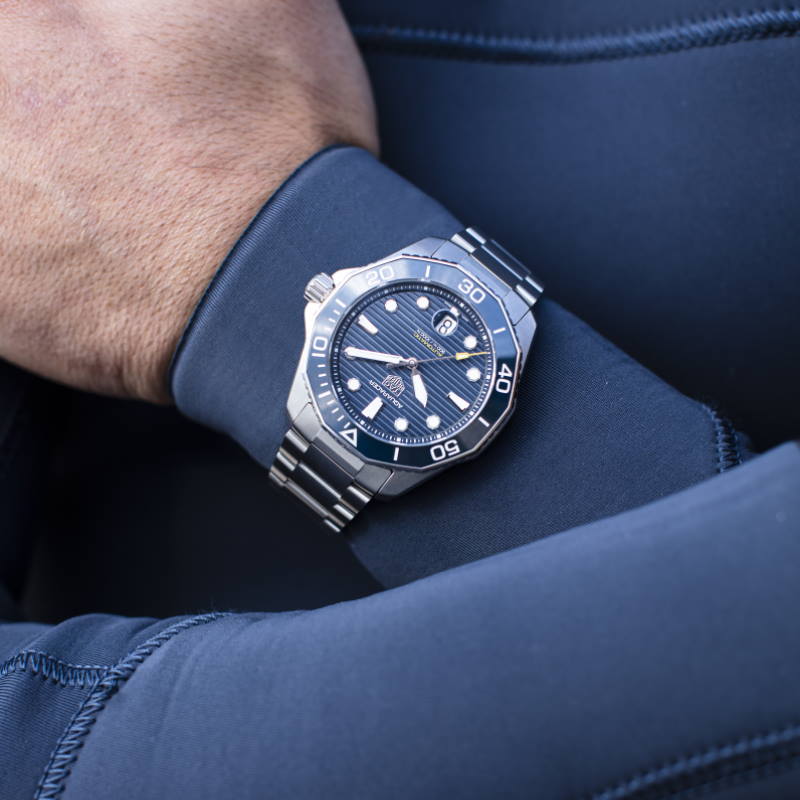 Its unmistakable aesthetic features a 12-facet bezel in the purest Aquaracer style and incorporates the most rigorous technical details, making it a contemporary treasure that continues the legacy that the watchmaker began more than four decades ago. In fact, as mentioned above, the predecessor of the Aquaracer Professional 300 is the memorable Heuer 844, a watertight diver's watch that quickly became a favourite of divers the world over, regardless of their level. It was followed by many other equally impeccable models, such as the Night Diver or the Series 2000 models in 2004, but we never anticipated the arrival of a marvel such as the one we have the pleasure of admiring today.

"The Aquaracer Professional 300 model takes up a story that inspires great admiration and is the most significant step we have taken in many years in taking our Aquaracer collection forward. It is a watch that goes beyond the established limits, highly functional, with a bold and unmistakable aesthetic and the promise of accompanying you in even the most extreme situations... The Aquaracer Professional 300 watch will take you into uncharted territory. After all, that's where we really find ourselves," TAG Heuer CEO Frédéric Arnault recently said in an interview.

The launch of the Aquaracer Professional 300 undoubtedly marks a new chapter in the history of TAG Heuer. Looking at the eight available references of this high-performance model, it is clear that during the design process the brand's experts wanted to maintain the main aesthetic codes of the original without losing sight of innovation, so all the key features of the model have been updated. 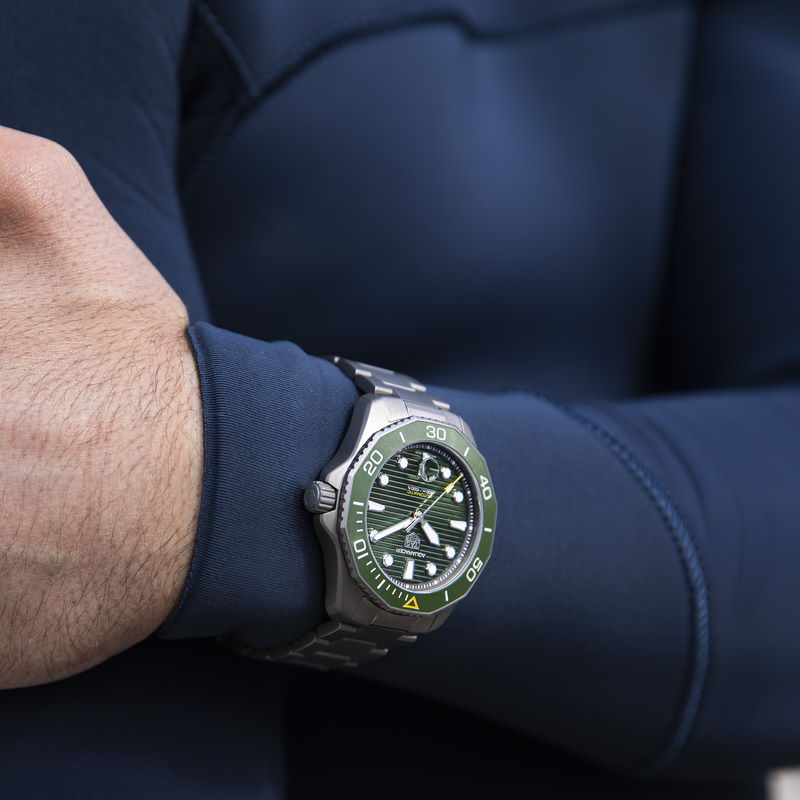 Maintaining the basic shape of the unidirectional rotating bezel with 12 facets since 1983, the Professional 300 version adds a scratch-resistant ceramic insert and now boasts knurled facets that make them easier to manipulate. In addition, the hitherto serrated inner profile of the bezel itself has been redefined to make it smoother, quieter and more practical, a change that takes the ergonomics of the model to a new level. As if that were not enough, the bezel also features eight octagonal hour markers and a 12-sided crown.

Immediately, the screw-down crown is reborn and presents a protective 'casing' with a softer, more curvaceous aesthetic, adding even more elegance to a watch that is certainly lighter and slimmer than its predecessors. What's more, without compromising its new water-resistance of up to 300 metres, the Aquaracer Professional 300 features a much slimmer case, bezel and metal bracelet, making it an all-rounder for everyday use and not just ideal for diving. 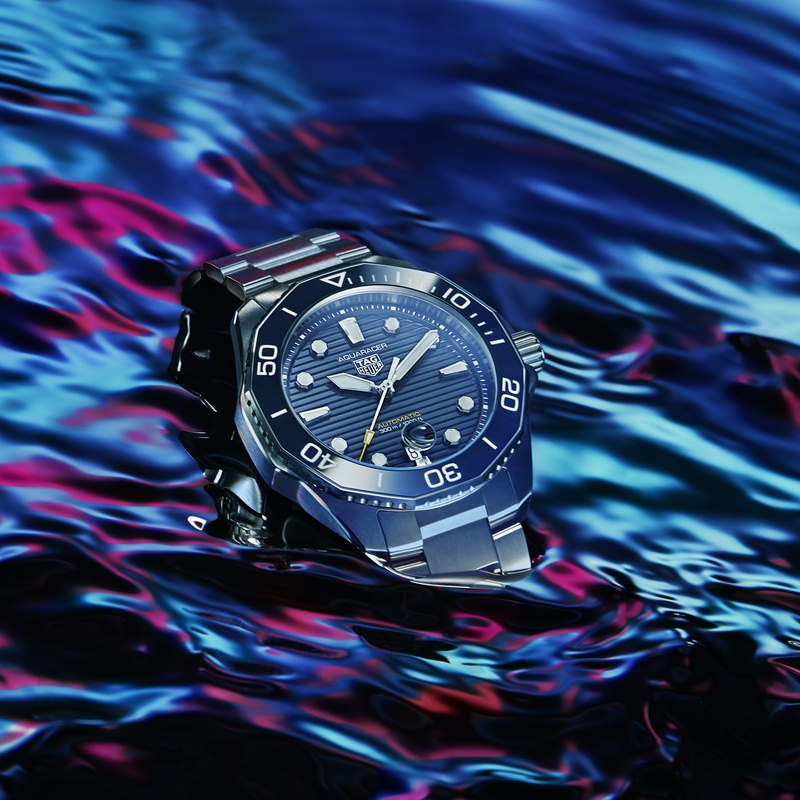 Following in the footsteps of the case, the case has also been redesigned so that the rim is bevelled and polished and the lugs are slightly shorter, creating a more sophisticated visual impact, complete with an exquisite renewed sapphire crystal with magnifier on the underside, just above the date window at 6 o'clock.

In line with the bold and distinguished language of the new 'watch of the seas', the overall readability and aesthetics at first glance have also been altered.

The Aquaracer now features a longer, sword-shaped hour hand, a narrower minute hand, and two types of Super-LumiNova® (luminescent material in the dark) coating: green for the hand and blue for the minute hand. This ensures much greater differentiation, clarity and legibility even under extreme conditions of poor visibility. 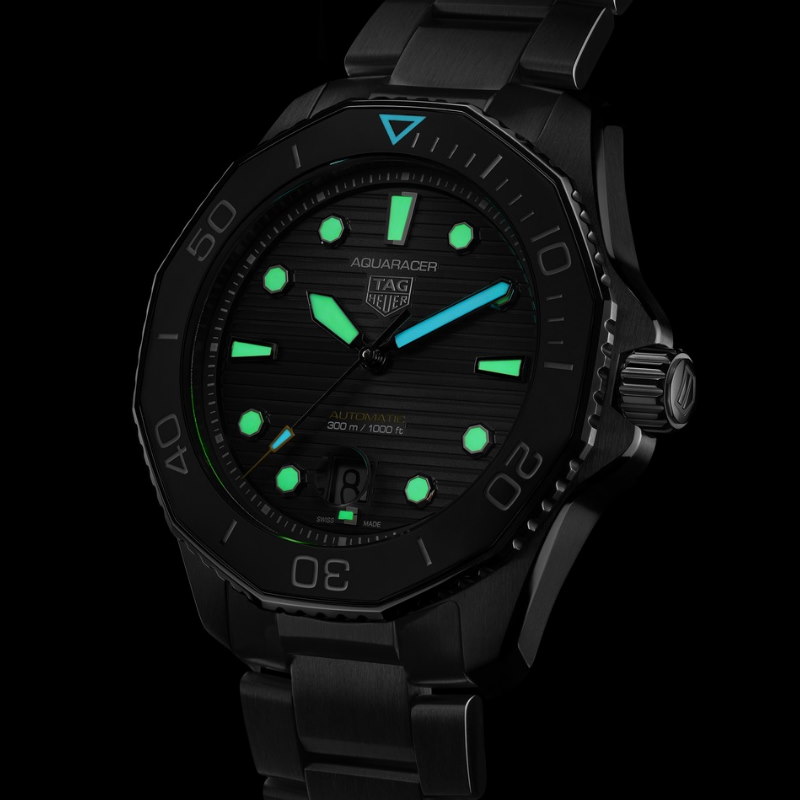 The Aquaracer Professional 300 has been launched under seven references in different colours ranging from black and blue to green or silver, and two case sizes, 43 mm or 36 mm, although the 43 mm men's models with blue (reference WBP201B.BA0632) or black (reference WBP201A.BA0632) dials are among the most popular. 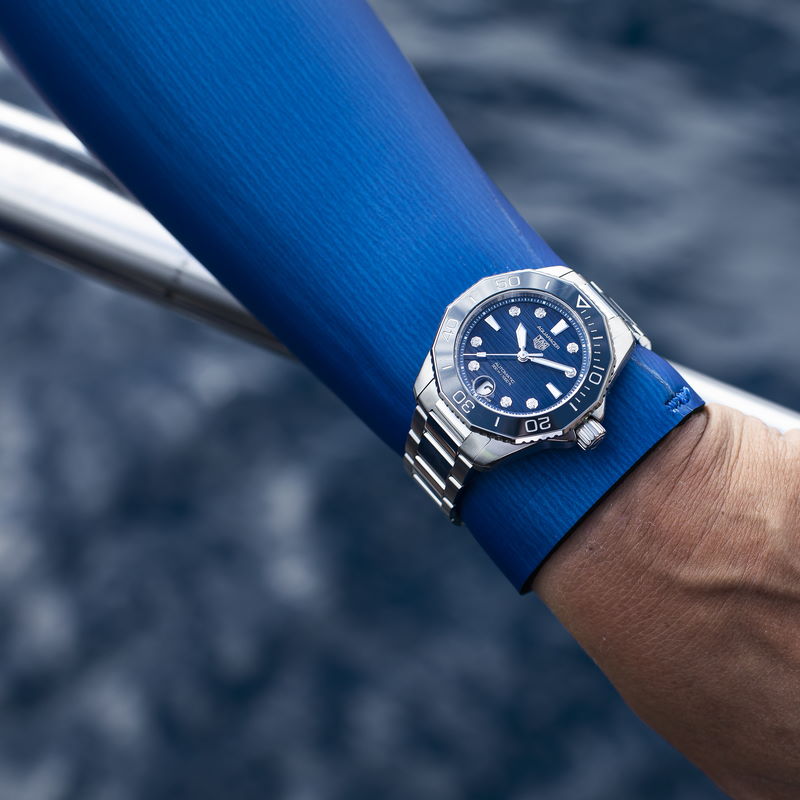 Both are made entirely of stainless steel (including the three-row bracelet), with a polished and brushed case, the legendary ceramic rotating bezel with matching 60-minute scale in blue or black respectively, crown at the 3 o'clock position and flat sapphire crystal with double anti-reflective treatment.

As for the details of the dial, the watch boasts its colour (depending on which colour we have chosen) using a sunray-brushing technique, which gives the timepiece more personality and nuance. The TAG Heuer logo is also visible on the rhodium-plated top, as is the inscription "AQUARACER AUTOMATIC 300m/1000ft" a little lower down, just above the angled date window with magnifying lens at the 6 o'clock position. 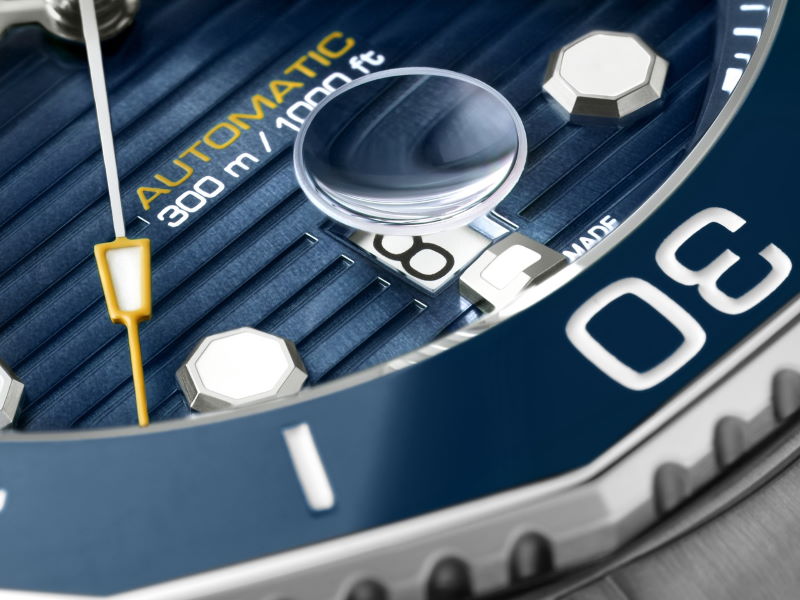 The Super-LumiNova®-coated details are abundant and vary from one another, as mentioned above, to ensure greater legibility. The applied hour-markers, the hour and minute hands and the central hand are rhodium-plated and finished with Super-LumiNova®, as is the white triangle at 12 o'clock.

It should be noted that the 36 mm versions of the model are engraved with a wavy pattern on the dial instead of the separate horizontal lines of the 43 mm Aquaracer Professional in black or blue. 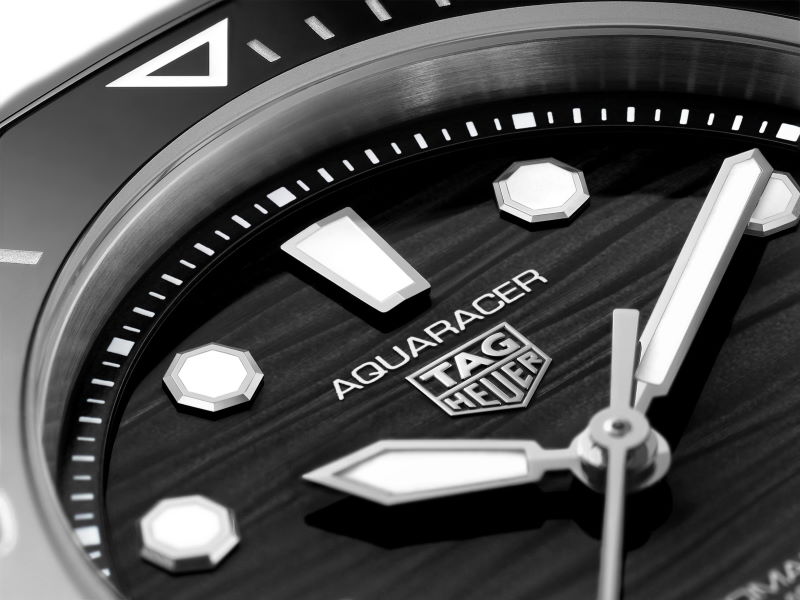 Despite these slight differences, all references share the same spirit and three other essential details: a new bracelet, an enviable calibre, and the famous diver's suit and diving suit design engraved on the caseback.

Regardless of colour or size, all TAG Heuer Aquaracer Professional 300 watches feature a sturdy integrated metal bracelet equipped with a hyper-precise adjustment system that allows the length of the bracelet to be extended or reduced by up to 1.5 cm. In this way, one can resize it so that, if you are a diver, you can wear the watch over your wetsuit. 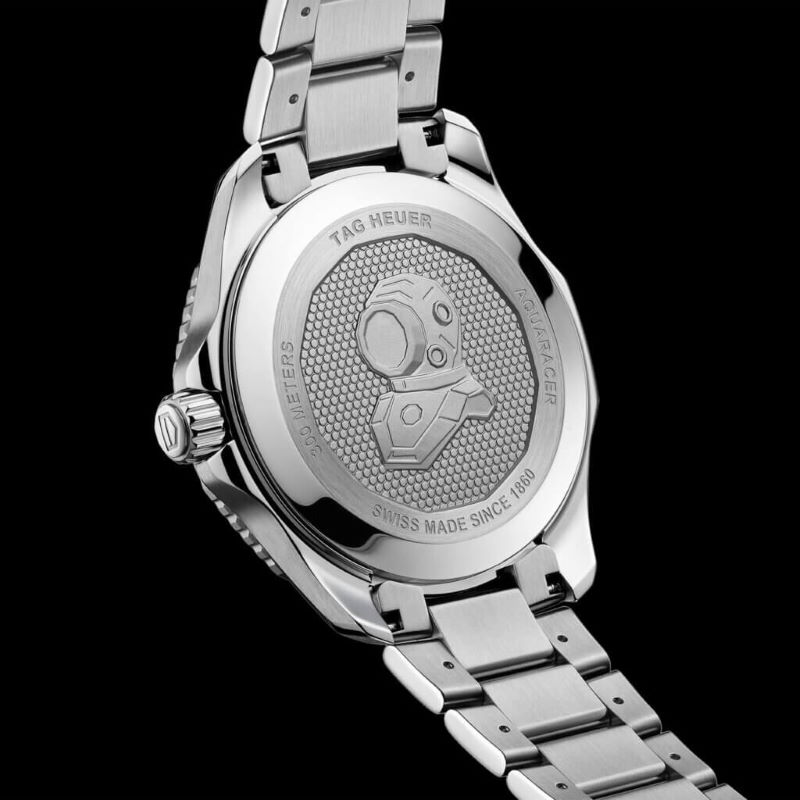 In fact, professionals from the aquatic world such as the American surfer Kai Lenny, the diver Robin George or the freediving champion Julie Gautier have not been able to avoid echoing these models by joining their advertising campaign on television, and some, like Lenny himself, are already ambassadors of the firm. But let's not forget that the Aquaracer is suitable for all terrains, situations and users, you just have to have that touch of intrepid adventurers and a passion for life. Ah! And finishing with the bracelet, it is important to know that its clasp is another marvel, being a folding clasp made of stainless steel with double security pushers, a fine adjustment system and the TAG Heuer shield engraved on it. 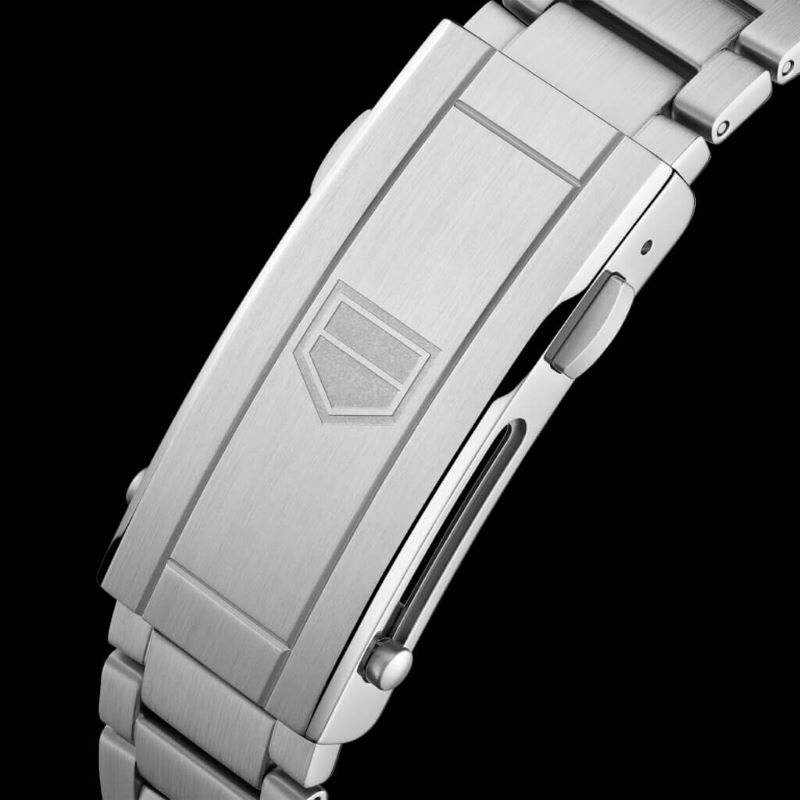 The calibre that lives inside it leaves no one indifferent either, and no wonder. This time, the Aquaracer Professional 300 houses TAG Heuer's Calibre 5, a super-reliable Swiss-made automatic mechanical movement, of course, which drives the hour, minute and seconds hands, as well as the date. For safekeeping, all parts of the model are finished with a compact caseback water-resistant to 300 metres. As mentioned above, to finish off this jewel of the seas, TAG Heuer's designers have chosen to engrave it with the famous diving suit with diving mask that we had the pleasure of seeing in the 2004 Aquaracer collection, although like many of the other elements, this familiar motif has also been slightly redesigned. 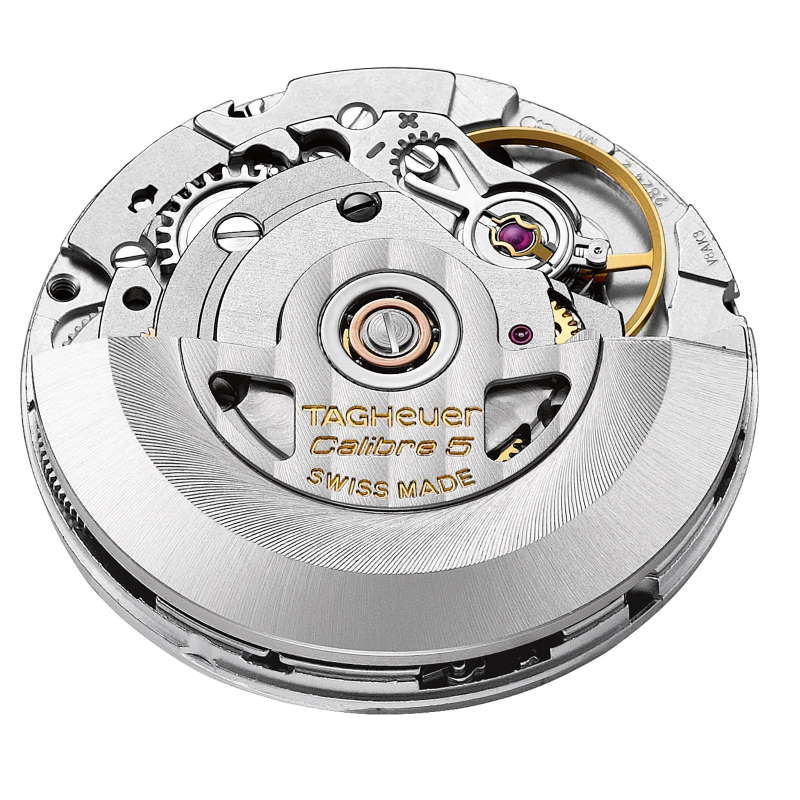 The diving mask, which is located at the bottom of the case, is now always in a vertical position, and its design is more angular and incorporates a new dodecagon viewfinder. This new Aquaracer Professional 300 will undoubtedly delight any diver, sea lover and life enthusiast in general, because although its soul and mechanisms breathe salt water, it is an all-rounder and knows no limits.