It was the year 1970 when TUDOR, known as the ‘signature of the rose’, presented its first chronograph to the world: the famous Oysterdate model. Since then, the brand that was created in 1926 by Hans Wildorf - also the founder of the Rolex Watch Company - has launched year after year authentic watchmaking wonders, always strongly linked to the world of motoring and motorsports.

Although that yes, TUDOR does not miss a single one when it comes to sports, and since the 1950s it has also remained at the foot of the cannon developing professional diving watches without ceasing. As a fusion of these two concepts and traditions, the exclusive Black Bay Chrono watch is born, which combines the roar of the engines with the flow of the waves in a single sports chronograph perfect for the most purists.

Certainly this model already existed, but to commemorate the 50th anniversary of its impressive chronographs, TUDOR has re-launched it with a reinterpreted case and two dials with contrasting sub-counters depending on whether we choose the version with black or opaline dial.

Its design follows the strong aesthetics of an elegant and off-road sports chronograph, but in addition to its renewed facade, it is available in up to three different bracelets: in riveted steel for a total stainless steel look: TUDOR Black Bay Chrono M79360N-0001 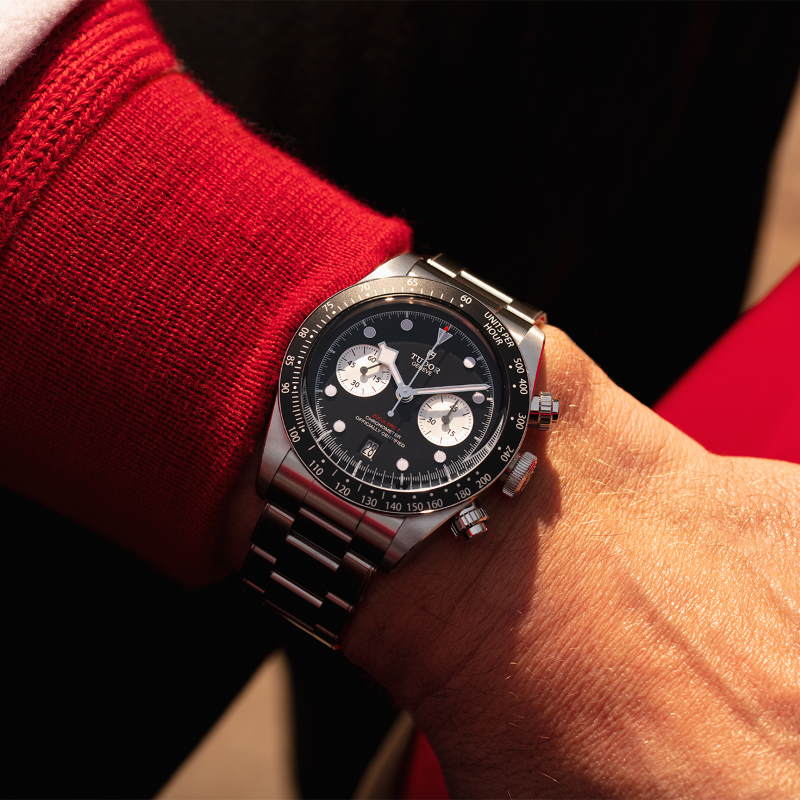 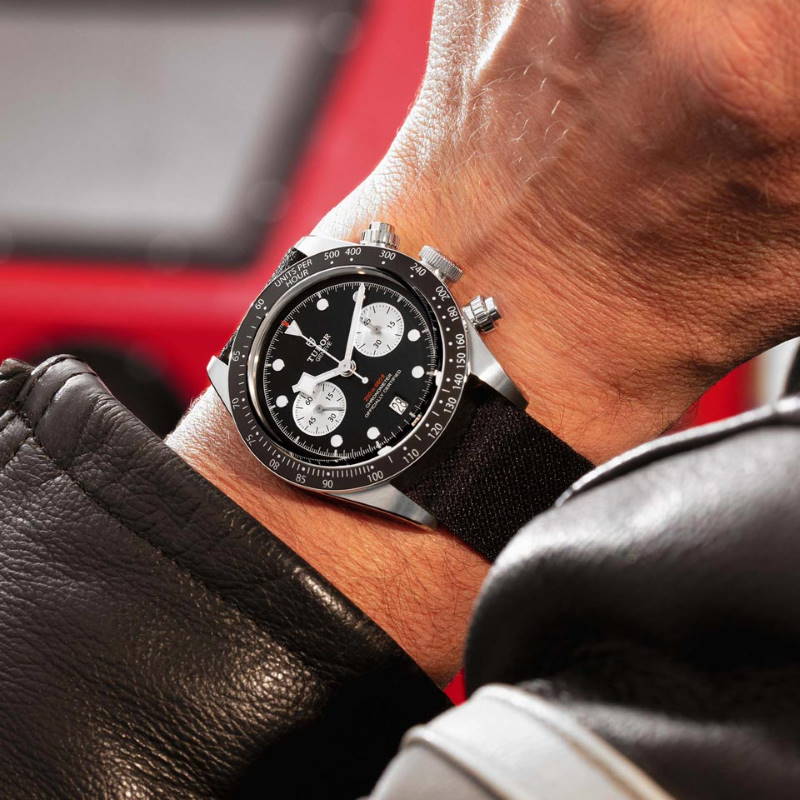 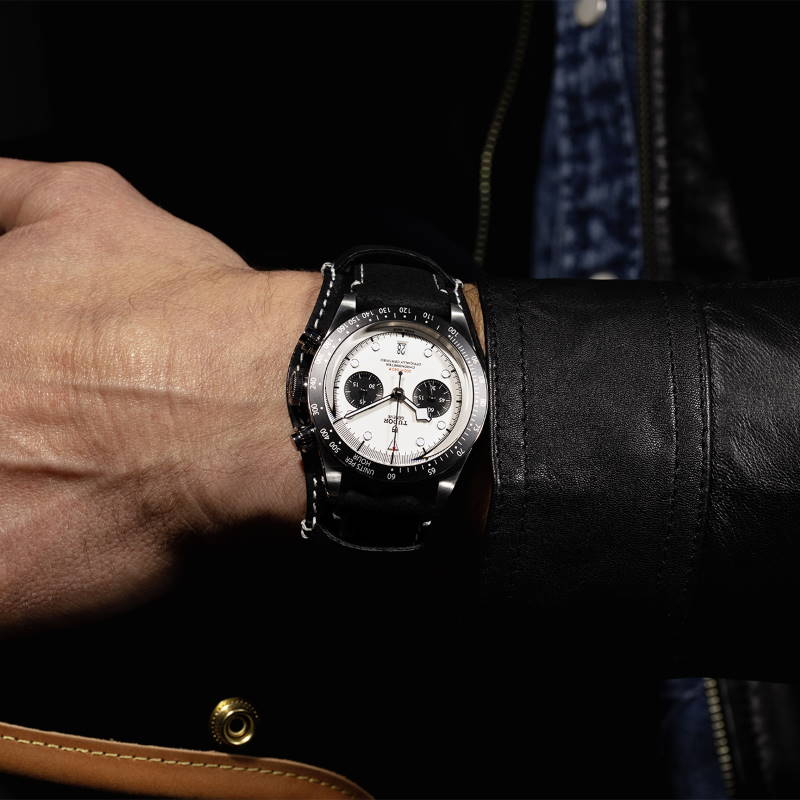 Interestingly, the latter is known as the 'Bundt' strap, which seems to refer to the delicious and popular 'Bundt Cake', a distinctive ring-shaped baked treat. And yes, indeed, the Bundt strap also surrounds and contains the Black Bay Chrono box in its entirety as would the Bundt cake itself, whose origin is inspired by some sweets from Central European countries (especially German-speaking).

Always true to the original Black Bay watches, the Chrono also endorses the legendary 'Snowflake' angular hands that became so popular after the introduction of TUDOR divers' watches from 1969 onwards. Of course, this time they have been slightly improved to ensure better readability if possible of all the information presented by the now somewhat domed dial. 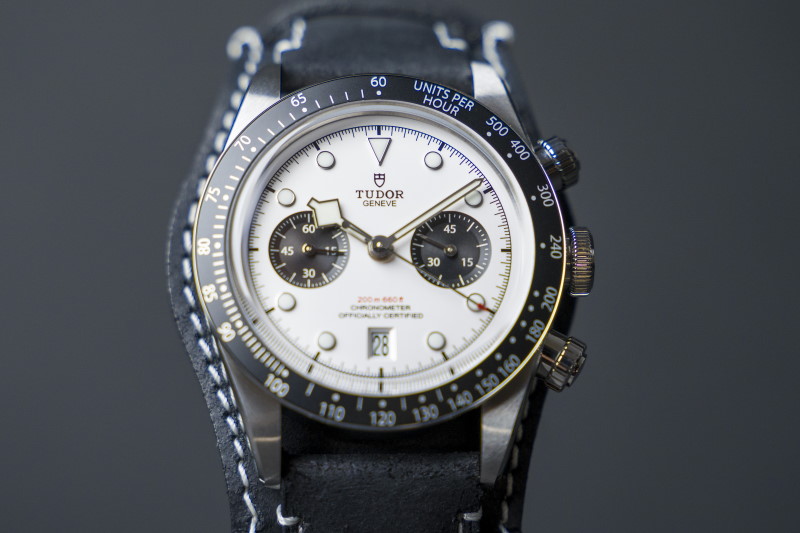 This dial with a rounded finish, which, as we mentioned earlier, exists in its matt black or opaline version, in turn includes the two hollow sub-meters that contrast in the opposite color to that of the dial (black or opaline) to, once again, offer unsurpassed readability. .

The new TUDOR Black Bay Chrono undoubtedly shares and encapsulates the essence of TUDOR's legendary Black Bay collection, but it is not just a reissue of the classic, but much more. The Chrono subtly blends the traditional with the best of modern watchmaking advances, promising a qualified neo-vintage aesthetic and reliability, robustness and accuracy that far exceeds industry standards. All of this is an achievement that is enhanced by the roughly seven decades of dive watch excellence that preceded it.

At first glance, the watch retains the traditional 41 mm diameter stainless steel case of the Black Bay hallmark, but it has been slightly refined by making a cut in the lower part of the sapphire crystal to, in addition, take advantage of and reposition the movement of the new model: the MT5813. Inspired by the firm's first chronographs, the Black Bay Chrono incorporates a 45-minute counter and a date window at the 6 o'clock position, as well as 316L stainless steel push-buttons screwed down at 2 and 4 o'clock. hours, also based on that first generation of fantastic models. 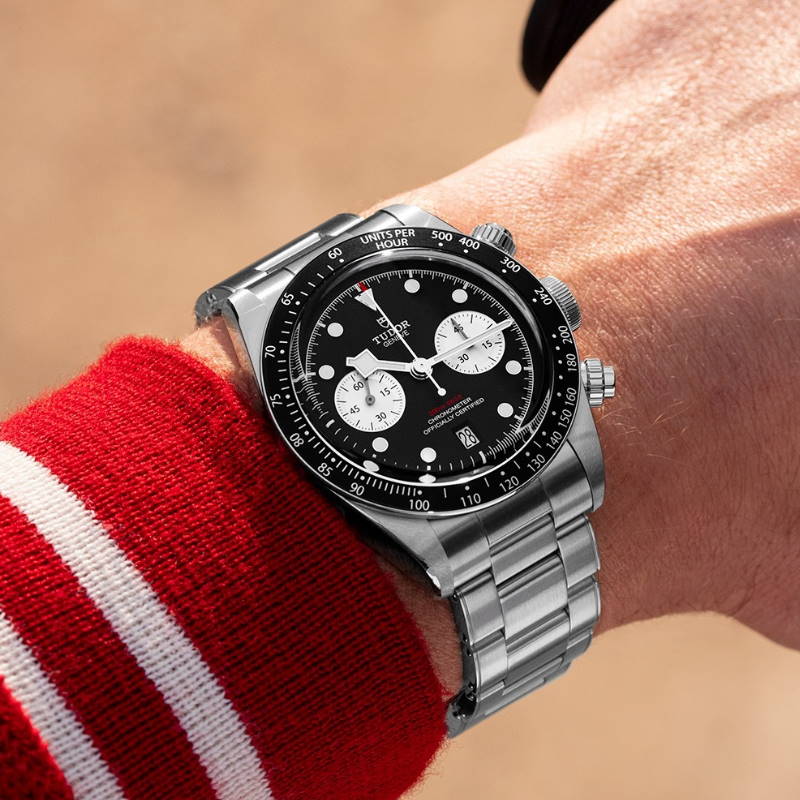 As for the bezel, this is a fixed piece of stainless steel with a piece of anodized aluminum in black color that does not vary regardless of the version we choose, and of course, there is a tachymeter scale with delicate silver markings, another essential element that In broad strokes, together with the steel crown with the TUDOR rose in relief, it completes this Black Bay Chrono with an exquisite sporty soul. However, its interior engineering and the options of aesthetic finishes and bracelets hide even more surprises.

TUDOR Black Bay Chrono M79360N-0006 is the name and reference of the version in opaline or white with a black leather strap and folding clasp as a security, one of the most innovative without a doubt. As we know, its case is made of 316L stainless steel and has a polished and satin finish, while the 'snowflake' hands (the Snowflake) look radiant with their coating in a rich Swiss luminescent material, the Super-LumiNova. Grade A ®, ideal for not missing a second in darker conditions. 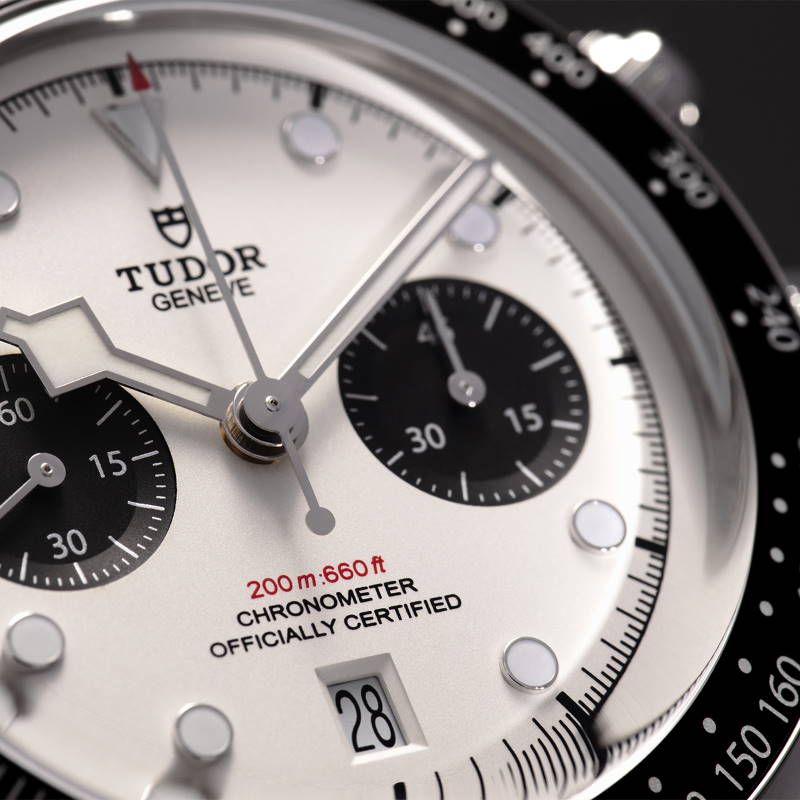 The fixed bezel with disc and tachymeter scale contrasts in black, since the dial of the M79360N-0006 is dressed in white, and under the domed sapphire crystal of the piece we find the two sub-counters in black and the various functions of the chronograph, always scheming and ticking at full throttle. These are its centrally located hour and minute hands, the chronograph second hand also in the center, a 45-minute chronograph counter at 3 o'clock, a small second at 9 o'clock, and the instant date function at the position. 6 o'clock.

As if that were not enough, and how could it be otherwise, all versions of this TUDOR Black Bay Chrono are water resistant, specifically they have a water resistance of up to 200 meters (or 660 feet).

The precision of the watch in question is completely infallible and admirable, which is why it stands as one of the great Swiss chronometers officially certified by the renowned COSC Institute (Swiss Official Chronometer Testing Institute). A title that is given by its movement, the Caliber MT5813 that we mentioned earlier and that offers a power reserve of up to 70 hours. 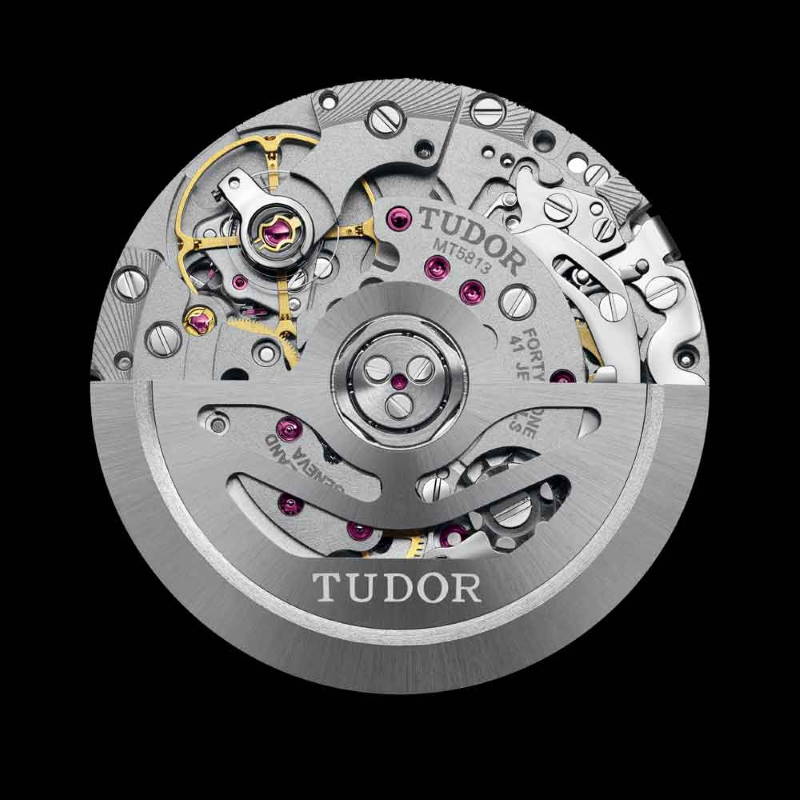 Passing all the tests that a watch undergoes to receive COSC certification is no easy task, but the TUDOR Black Bay Chrono has proven that it can handle anything and has exceeded the performance standards of this notorious independent laboratory. Furthermore, although the COSC allows an average variation in the daily operation of a watch of between -4 and +6 seconds in relation to the absolute time in a single movement, TUDOR insists on achieving a variation of -2 +4 seconds.

Manufactured in the traditional watchmaking style, the movement includes a column wheel, a vertical clutch, and its finish is typical of TUDOR-stamped calibers, although this jewel of watchmaking engineering was born as a result of a long collaboration between Breitling and the firm. from TUDOR, who decided to share their expertise and ingenuity to create certain mechanical movements.

For its part, the TUDOR Black Bay Chrono Black Dial M79360N-0001 refers to the same Chrono model in its version with a black dial (and silver sub-meters), steel case and bracelet. 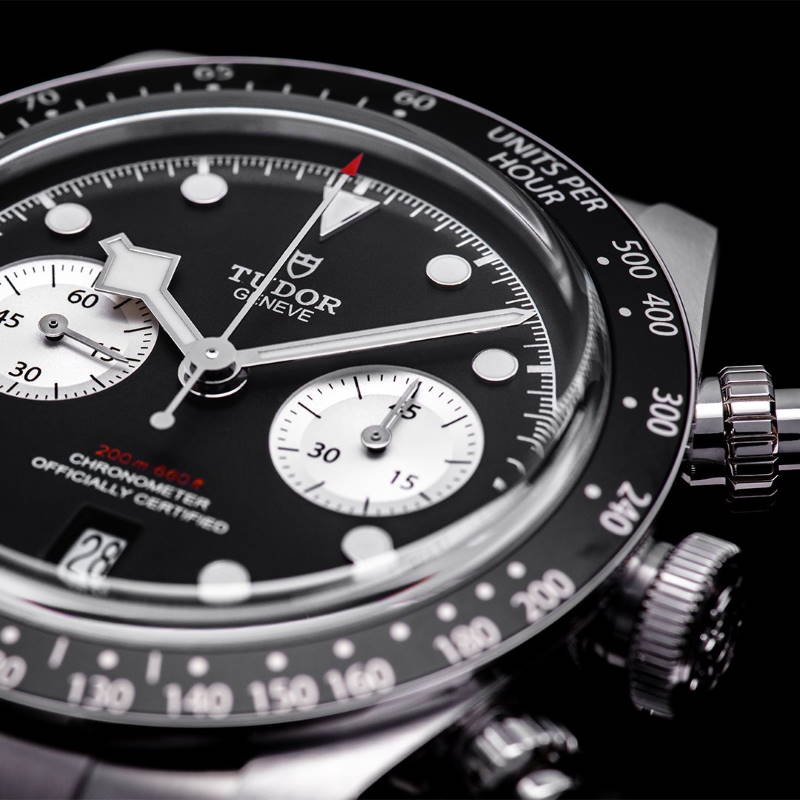 By way of contrast, it is true that the use of fabric straps has always been one of TUDOR's greatest hallmarks, becoming in 2010 one of the first and few brands to offer this type of product in its catalog. Even today, Julien Faure's famous company is in charge of making these bracelets on 19th century Jacquard looms in Saint-Étienne, a beautiful region of France.

As you might expect, these fabric straps, which are one of three options available for the Black Bay Chrono model, offer supreme comfort and quality, but the M79360N-0001 version of the model sits firmly on a stainless steel bracelet rather than has nothing to envy.

In his case, the piece that hugs our wrist is inspired by the bracelets with rivets manufactured by TUDOR itself in the 50s and 60s, and which were easily recognizable by having the rivet heads to fix the visible links on one side. Some links that, in turn, presented a characteristic structure in a stepped form.

As is evident, all these details are appreciable in the current model, so it is not surprising that it has already dazzled every lover of haute horlogerie with a fine vintage halo.

Regarding the guarantee, all versions of this model, whether with a steel bracelet, in Jacquard fabric, in black leather or either of the two adaptations in opaline or black, have a transferable five-year guarantee. Although if you ask us how many years we would like to live with a TUDOR Black Bay Chrono as a companion, the minutes or hours are not enough to count them. His excellence is infinite, and our devotion to him is unquenchable.