Sailing determined on a sea of rich watchmaking history with the smell of saltpeter and legends of the most intrepid divers and members of the French Navy, comes the new TUDOR flagship, the Black Bay Fifty-Eight "Navy Blue", dressed in an elegant navy blue color better known as 'TUDOR Blue'.

Following the success of the first TUDOR Black Bay model in 2012, which blew everyone away at Baselworld that year with its 41mm diameter, the classic 'Snowflake' needles from the Award-winning Geneva firm, and its inherent historical heritage, the first Black Bay Fifty-Eight burst onto the market in 2018.

In the blink of an eye, the latter became TUDOR's best seller to date. It was compact, 39mm in size with a decidedly vintage aesthetic elevated by the gold hands and indexes. At that moment, every lover of haute horlogerie knew that, like a tsunami, the Fifty-Eight model had arrived and sentenced a before and after in the market without prior notice. 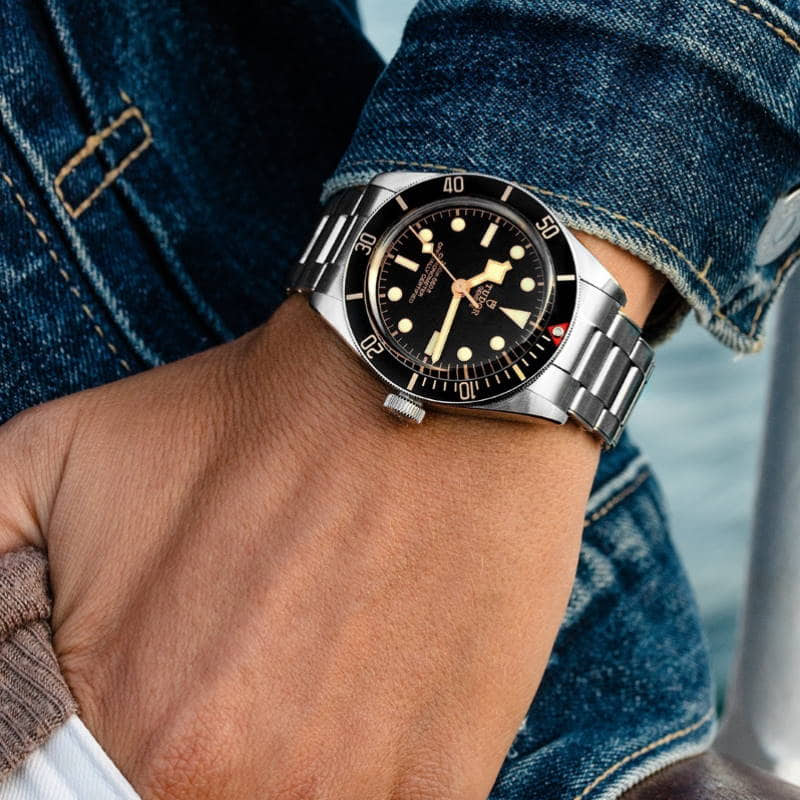 For years, that original Fifty-Eight sports car with its bezel and black dial has been a true claim of the brand, and although it seemed that its excellence could not be surpassed, the brand new "Navy Blue" version has immersed us in what it already is. a new era for the firm. As if it were one of those mythical treasures that we have heard so much about in pirate and sailor legends for as long as we can remember, the Black Bay Fifty-Eight "Navy Blue" is a phenomenon that springs from the waves with force to invade our wrists and give us valuable hours, minutes and seconds seen through its domed sapphire crystal. 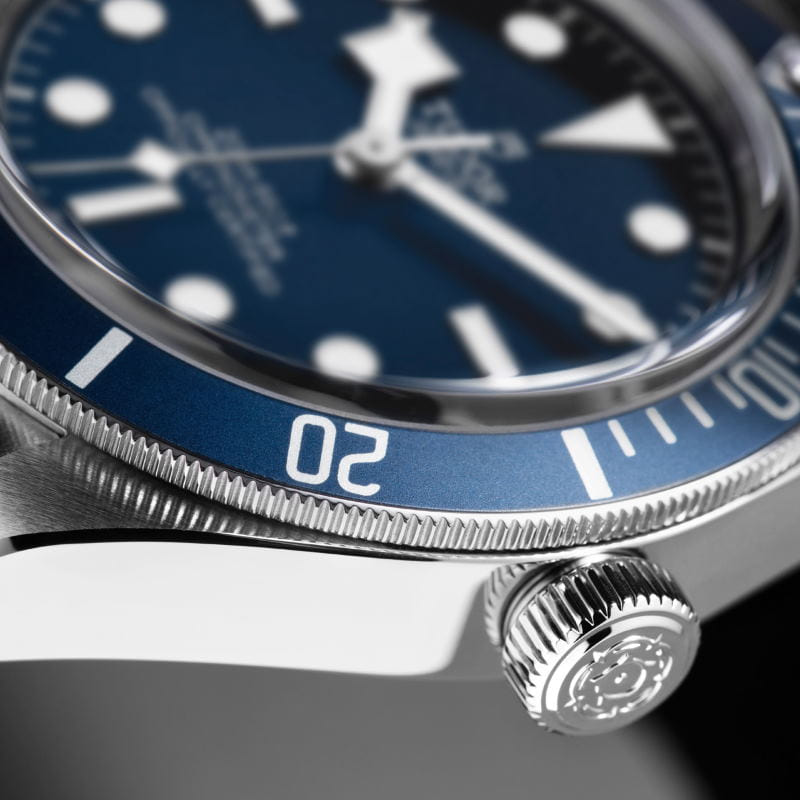 We know very well that, throughout history, TUDOR has not hesitated to base the design of its new watches by looking back and commemorating old models that have been key pieces in its history.

Known as the signature of the rose, for the distinctive rose engraved on the crowns of its watches, it has always been recognized for its strong identity since it was created in 1926 by Hans Wilsdorf, the visionary founder of the Rolex Watch Company. Backed by the well-known watchmaker label, TUDOR was born with the aim of manufacturing extraordinarily reliable watches, with a very attractive and refined aesthetic, and with an unbeatable value for money that would make them, as soon as they are presented, chosen by the most intrepid customers. not only for your day to day, but also, and especially, for your adventures on land, sea and air. Indeed, it was, and it continues to be so. 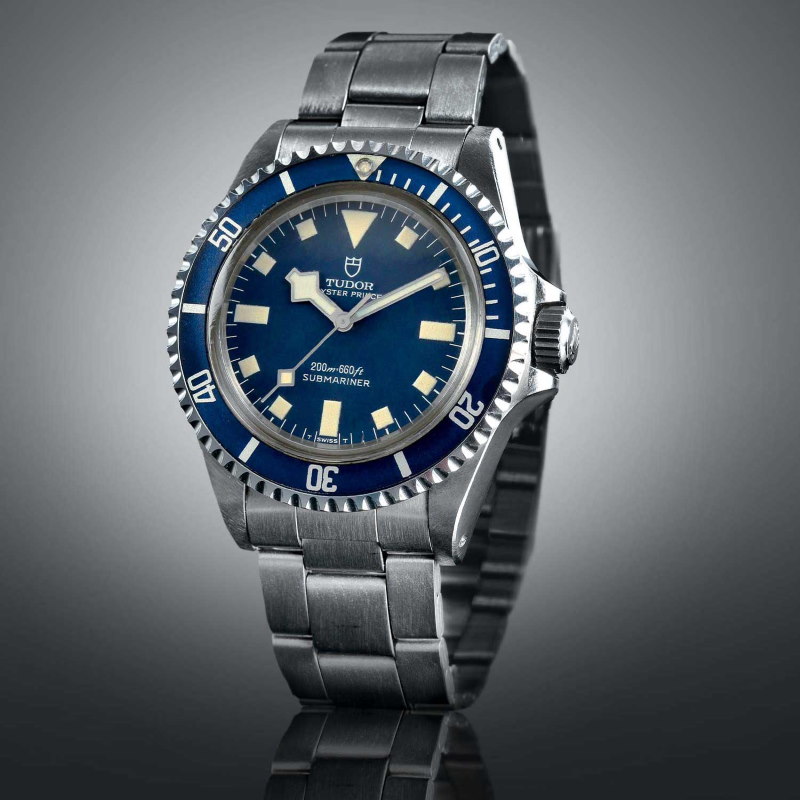 Although TUDOR's first professional diver's watch was launched in 1954 under the reference 7922, it was in 1958 that the 'Big Crown' or reference 7924 arrived to the world, a diver's watch waterproof to 200 meters that became a true icon and referenced today by the brand new and already coveted Fifty-Eight «Navy Blue». However, the new model of the collection also refers, first, to its color, TUDOR's navy blue as its name suggests, and on the other hand, to the magical year of 1969. 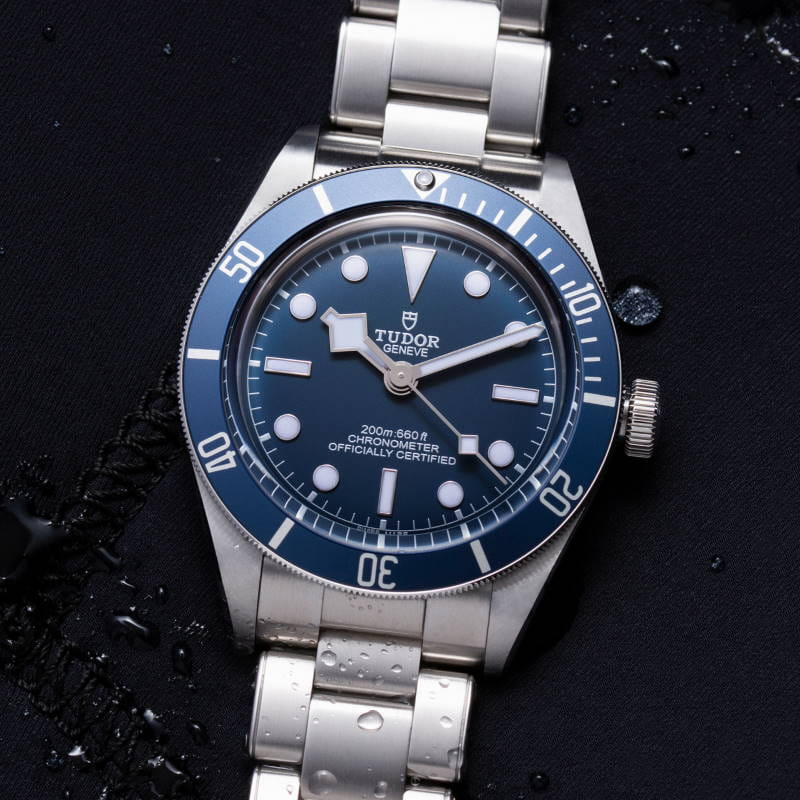 More than half a century ago, the firm launched its first watch with a blue dial and bezel for divers, and in the 1970s it ended up equipping French Navy forces with it.

The firm chose to dress a great variety of its sports watches in that tonality as well, which is why it did not take long for it to become an easily recognizable aesthetic distinctive at an international level.

How could it be otherwise, the Spanish designer Ander Ugarte has rescued those gallants and robust ticking models from the brand's own historical archive to produce the new «Navy Blue». Because TUDOR, while being backed by the supreme quality of Rolex, has always demonstrated and defended its own character, with unique models that have left men and women around the world speechless, not only for their aesthetic appeal, their comfort, reliability or more affordable price, but by own movements like the caliber of manufacture MT5402 that incorporates the current Fifty-Eight «Navy Blue». Said automatic caliber, it should be noted, is not an adapted one, but rather a last generation one specially manufactured for the Fifty-Eight models. 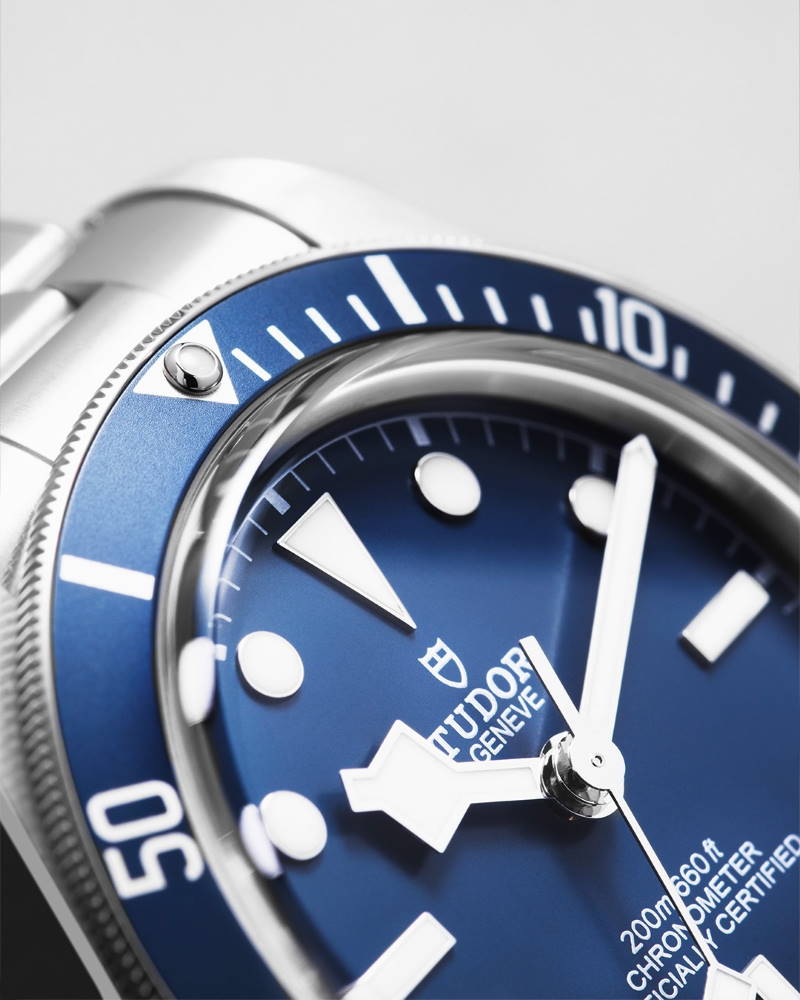 Its design offers impeccable precision and longevity, and with its non-magnetic silicon spiral, it is certified as a chronometer by the Swiss Official Control of Chronographs (COSC), far exceeding the standards of such an independent body thanks to its excellent performance. Moreover, the average variation of the clock is between -2 and +4 seconds, when in fact between -4 and +6 seconds are allowed in relation to absolute time in a single movement.

And, as if that were not enough, it is equipped with 27 jewels and a power reserve of 70 hours. That is, we can pack our bags and spend a weekend on the coast leaving our watch at home and, when we return, we will not have to wind it to set the time. 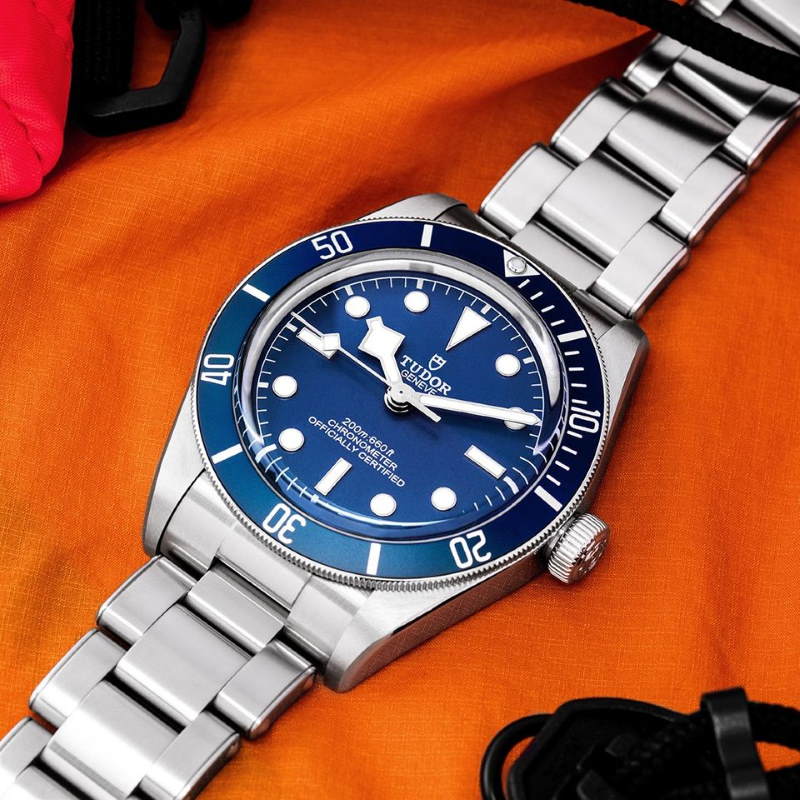 But beyond its obvious comfort, which is given not only by its materials or the power reserve of its caliber, but also by its perfect size adaptable to practically all wrists, the Black Bay Fifty-Eight «Navy Blue» monopolizes all the looks for its impeccable wrapping. She is indisputable.

Aesthetically, the model maintains the dimensions and some details of the original Fifty-Eight, but at first glance it dazzles us when we see that it makes a nod to the French Navy, its history and the sea, perpetuating the tradition of TUDOR blue with its disc bezel and dial in navy blue. Of course, despite its historical tints, the new model has a slightly more contemporary, smooth and fresh finish compared to its predecessor. The watch maintains its ultra-resistant 316L stainless steel case perfect for diving, as well as its domed dial, but this time with a sapphire crystal instead of Plexiglas. 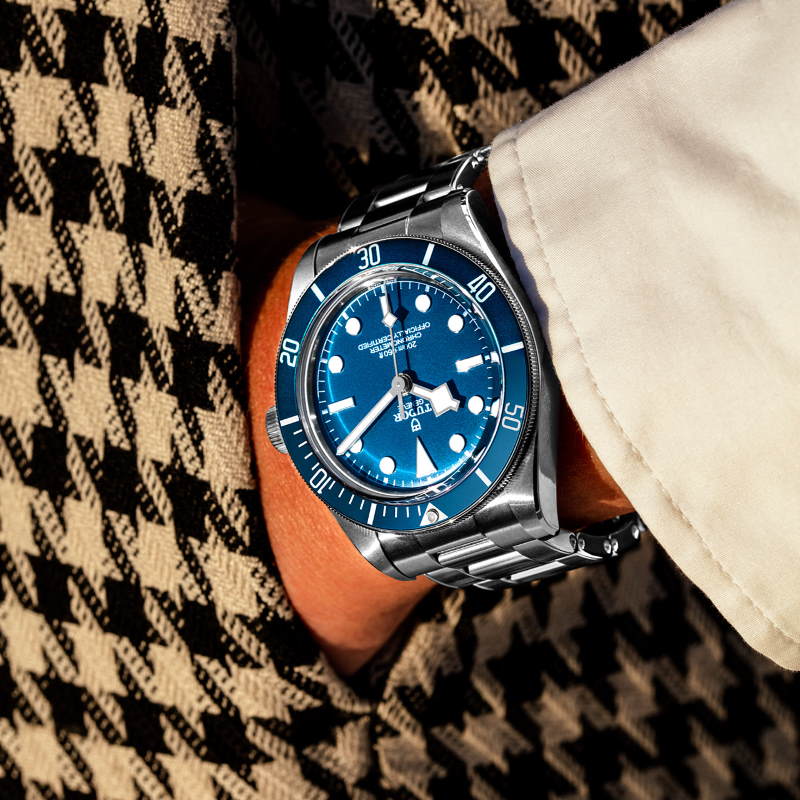 The hands are also the original 'Snowflake', but together with the large indexes and numerals, instead of gold, these three elements are now silver and have been coated with a Swiss grade A Super-LumiNova® phosphorescent material that shines in color. green in the dark. In this way, the «Navy Blue» becomes a very versatile Fifty-Eight that broadens the profile of its audience. 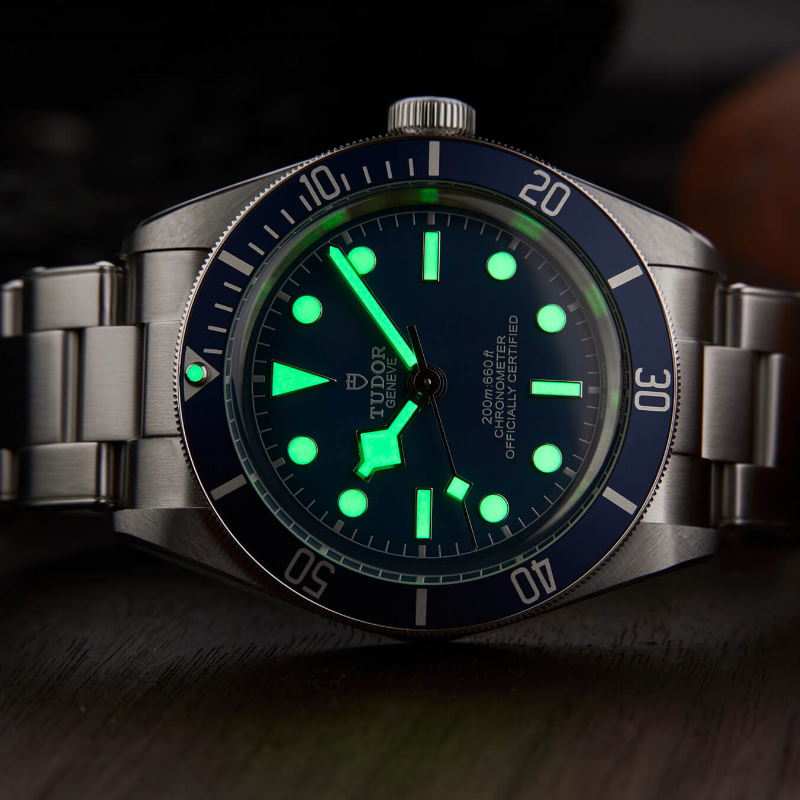 The large crown engraved with the TUDOR rose is absolutely capital in this new model, but the steel case now features satin-finished fronts and polished beveled-edge sides. That softness runs through the entire piece as if, very sweetly, the waves of the sea had molded it to the perfect degree of elegance and polish.

To finish completing the watch, which will go down in the collective imagination as one of the most beautiful and resistant of TUDOR, there are up to three different combinations of wrist grip in which the blue tone predominates:

- The first, in a marine Jacquard fabric with a silver band in the center that differs from common NATO straps, in which the fabric has been printed with the desired color. In this case, since the launch of «Navy Blue» also celebrates 10 years of collaboration with the Julien Faure strap factory, based in the French region of Saint-Étienne, each color that makes up the strap is made up of a different interlacing thread. In this way, when manufactured using the 19th century looms of expert manufacture, the strap enjoys greater firmness, durability and presence that is finished with a simple buckle closure. 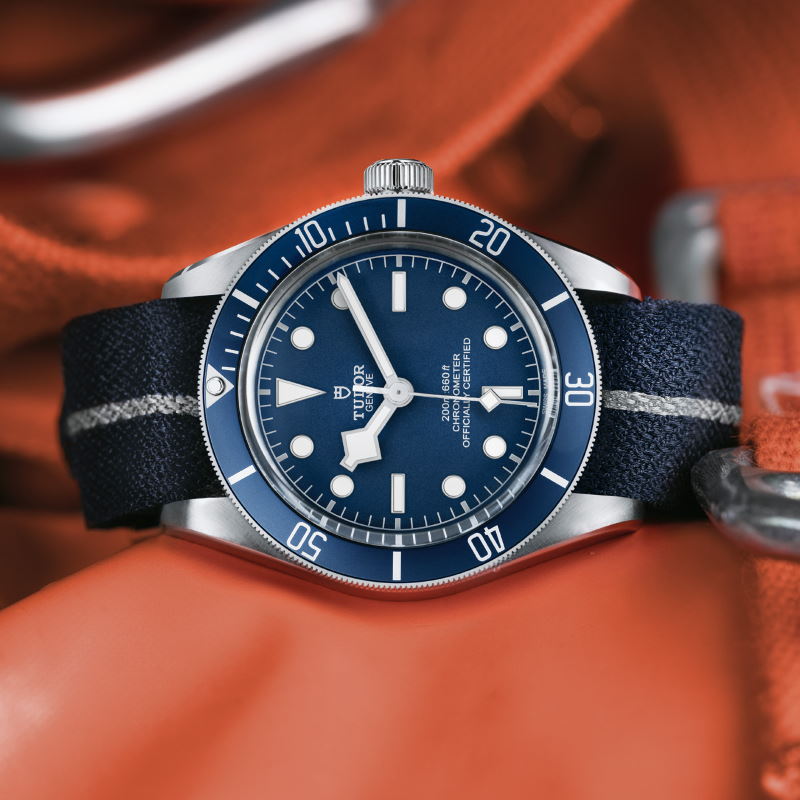 - Secondly, and also in blue, you can opt for a soft touch strap similar to flannel and with two closures: one folding and the other security. 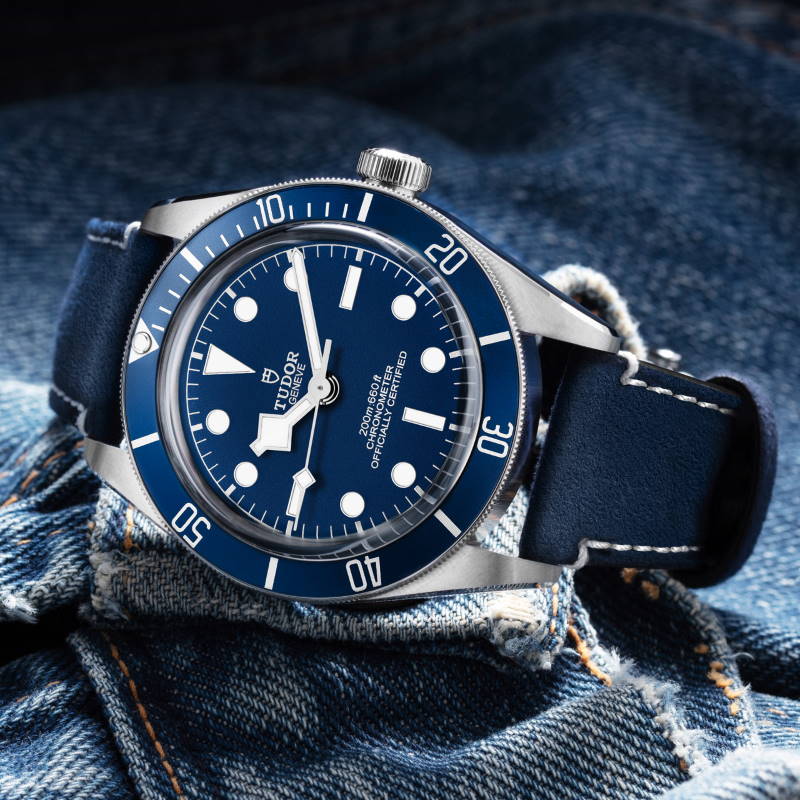 - And finally, we have the option of choosing a riveted steel bracelet with a polished finish that screams quality and comfort no matter where you look. 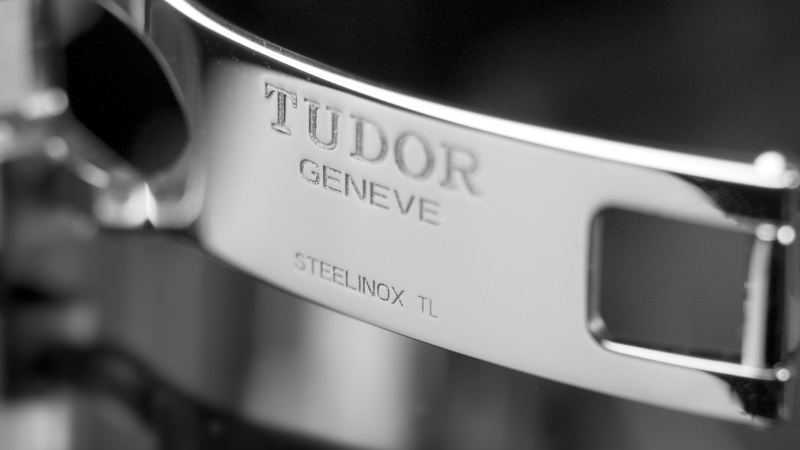 In addition, showing its exquisite attention to detail, TUDOR has incorporated a ceramic bearing in the seal that prevents metal-to-metal contact to prevent wear and, incidentally, satisfy our 'ASMR' (that biological phenomenon that we gives pleasure to certain auditory, tactile or visual stimuli) with its special and very satisfying 'click' sound. 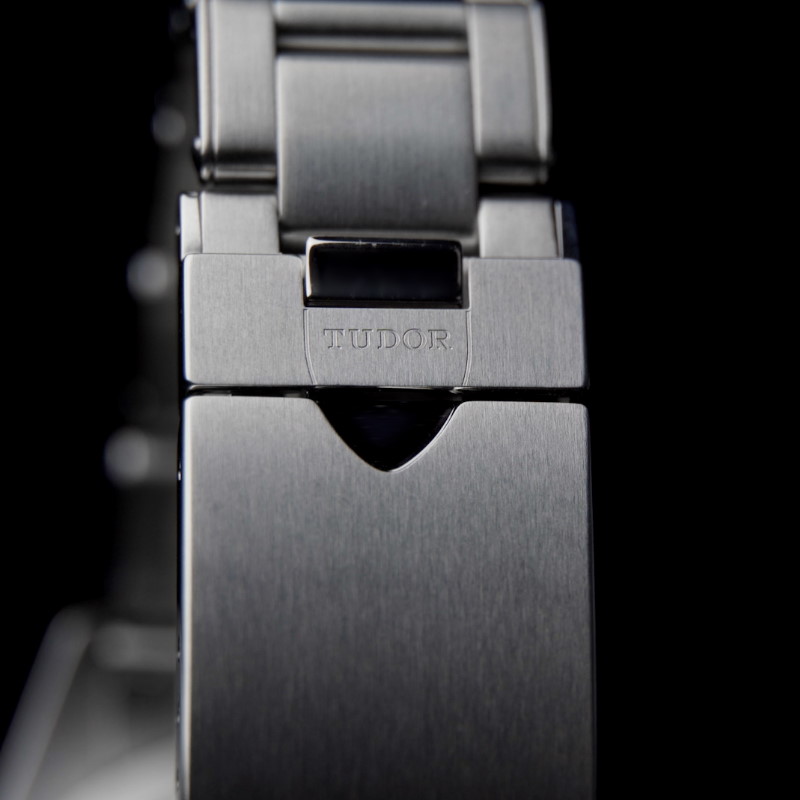 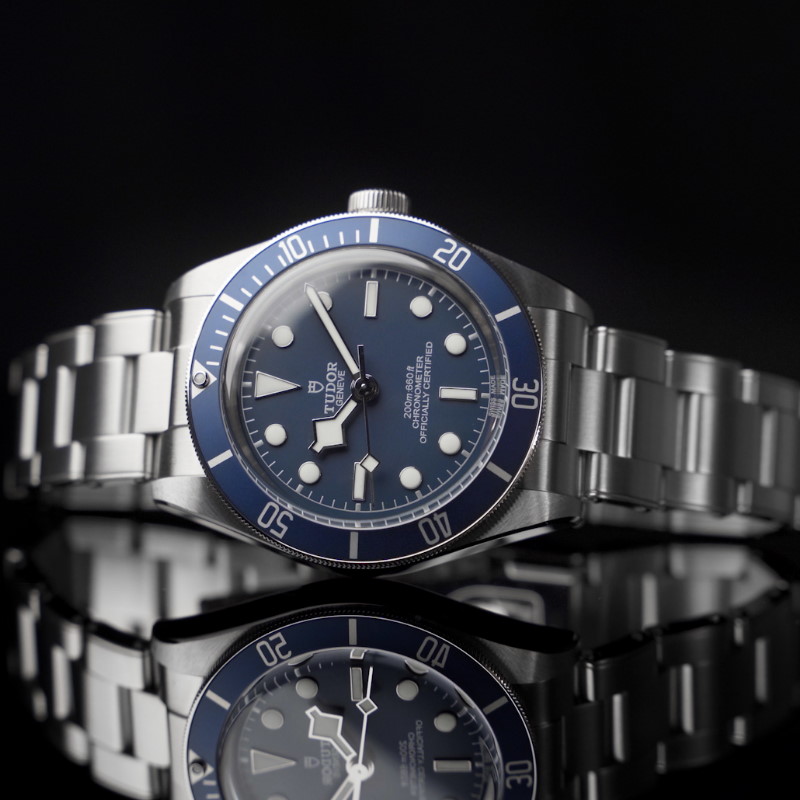 With its water resistance of up to 200 meters and a distinguished dial that reads the name of the firm together with its coat of arms, city of origin (“Geneve”) and official COSC certification, it ends up becoming an exclusive model so reliable that TUDOR offers a warranty of up to five years. Undoubtedly, the signature of the rose has once again been surpassed, and the murmur of the waves that modulate its history linked to the sea rumored us, and we do not doubt, that the «Navy Blue» is going to enchant us and plunge us into the deepest of his soul eternally.