Kennedy Space Center in Cape Canaveral, Florida, on July 16, 1969. On that historic day, the Saturn V rocket took off from the United States, propelling the Apollo XI mission with a single objective: to take the first human beings to the moon. history as soon as you set foot in it. 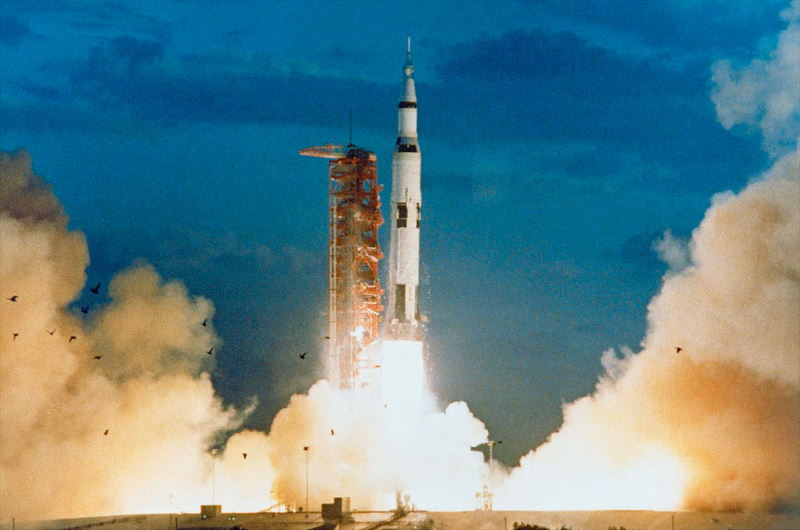 Neil Armstrong, Edwin Aldrin (nicknamed "Buzz"), and Michael Collins boarded their ships that day 16; Armstrong and Aldrin would travel in the Eagle lunar module, while Collins would fly in the Columbia command module around the moon. But they did not take off alone, but accompanied by the first OMEGA Speedmaster watch, which had been specially chosen by NASA for what would become one of the greatest feats of the 20th century, the first moon landing.

After four days of travel, the famous astronauts and their chronographs arrived and finally walked the lunar surface in the early morning of July 21, 69, witnessing the first 'tick-tock' 384,400 km from Earth.

All this for the first time in the history of mankind and before the attentive gaze of millions of people who, glued to the television, heard Armstrong's now mythical phrase from the only natural satellite on Earth: “This is a small step for the man, but a great leap for humanity. "

Since then, that OMEGA Speedmaster watch has become a legend, bearing a new surname with interstellar heritage: Moonwatch. Of course, more than 50 years have passed and, consequently, this model has been changing and evolving over time until it reaches its most current version: the Speedmaster Moonwatch Professional.

More specifically, we are talking about the 42mm Moonwatch Professional Co-Axial Master Chronometer Chronograph with hesalite crystal, although there are also two other versions with sapphire crystal. But, before getting down to business and beginning to unravel every detail of this new Swiss watchmaking masterpiece, it is vitally important to understand the history of the original model and why it was chosen as the “Officially Certified Wristwatch for All Manned Missions. ”From NASA.

Launch of the first OMEGA Speedmaster

It was 1957 when the first Speedmaster was launched, and few could foresee that it would end up becoming the first watch to reach the moon. Not because it was not up to par, far from it, but because it had not been designed for that purpose in the beginning.

The model, which innovatively had a third counter to measure the hours (something that many chronographs did not have at the time), and a tachymeter scale on the bezel to calculate the speed of vehicles, aspired 'simply' to be the most successful and avant-garde of the Earth. Of course, its quality and precision was such that no one was surprised when this was finally the model selected to become one more crew member of the Apollo XI mission in the middle of the space race between the US and the former Soviet Union. 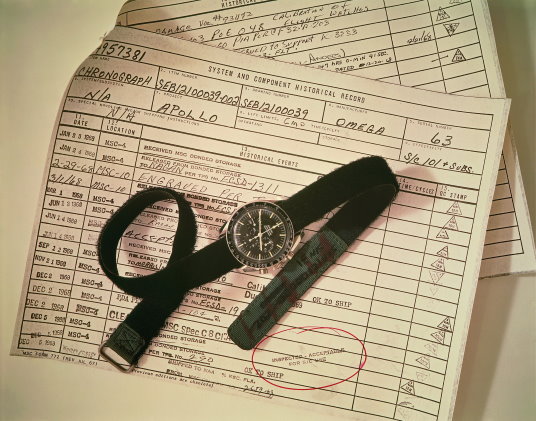 At that time, OMEGA was already a prestigious Swiss firm with more than 100 years of experience, and knowing of its excellence, astronaut Wally Schirra was the first to carry his particular OMEGA Speedmaster on a first manned space flight of just over 9 hours. in Sigma 7. That's when, unofficially, the relationship between NASA and OMEGA began to take off.

Testing of the OMEGA Speedmaster Moonwatch

The astronauts asked to be able to wear a wristwatch that would allow them to control the time in case the other instrumentation failed, whether it was communications with Houston or the small digital chronometer that they had incorporated into the suit and that sometimes gave them problems. For this reason, in 1964 the fight between the best watchmaking firms was given the starting signal to dress astronaut wrists with an infallible chronograph both for the lunar mission and for all subsequent missions. However, only one could be the winner, and although today we know that OMEGA was the winner, do we know why? And who made such a decision?...

James Ragan, a former NASA engineer and key figure on the Apollo XI mission to the Moon, was commissioned to find the most robust and accurate chronograph for space agency missions in just one month. 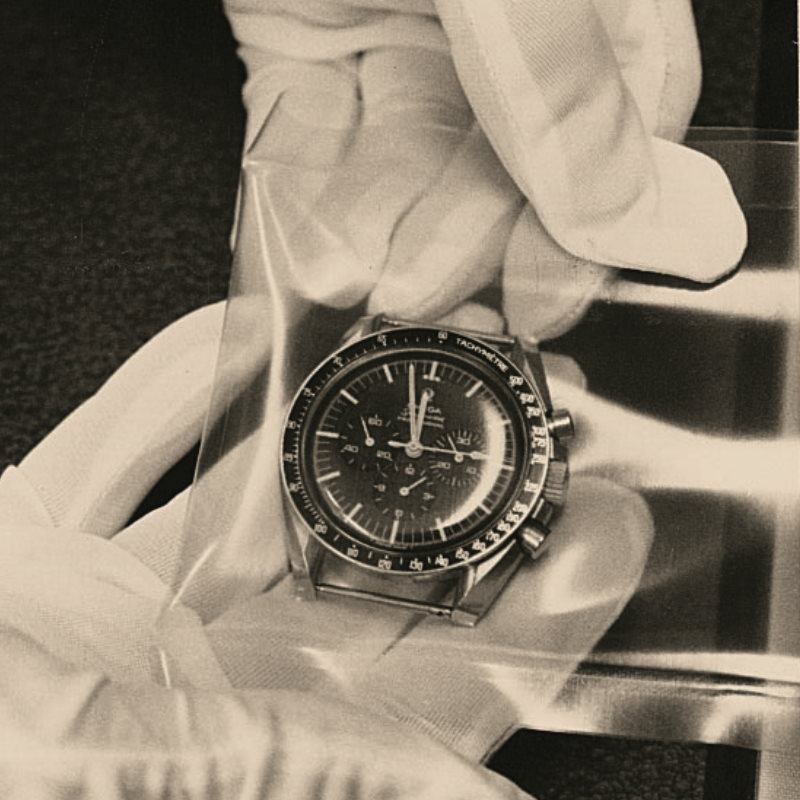 To find it, Ragan had to subject models of different brands to extreme tests, such as resisting a force of up to 40 g or temperatures between 100 ° C and -20 ° C, but the hardest was the 'thermo vacuum'.

This test consisted of introducing the watch into a chamber, removing the air completely, and then raising and lowering the temperature extremely. The Speedmaster, later 'The Moonwatch', passed not only that test again and again, but also surpassed all the others, so it was quickly proclaimed the chosen one and became worn by all the members of the Gemini and Apollo missions. to come. 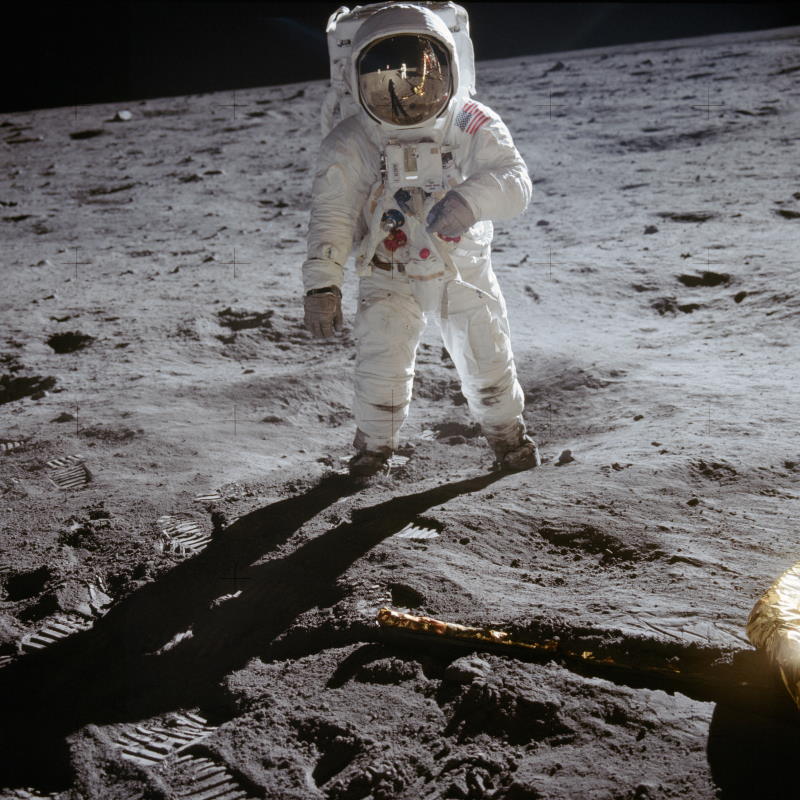 And from then until today, the coveted manual winding mechanical model has endured and evolved until reaching our hands in its new OMEGA Speedmaster Moonwatch Professional version with hesalite crystal (or reference 310.32.42.50.01.001). 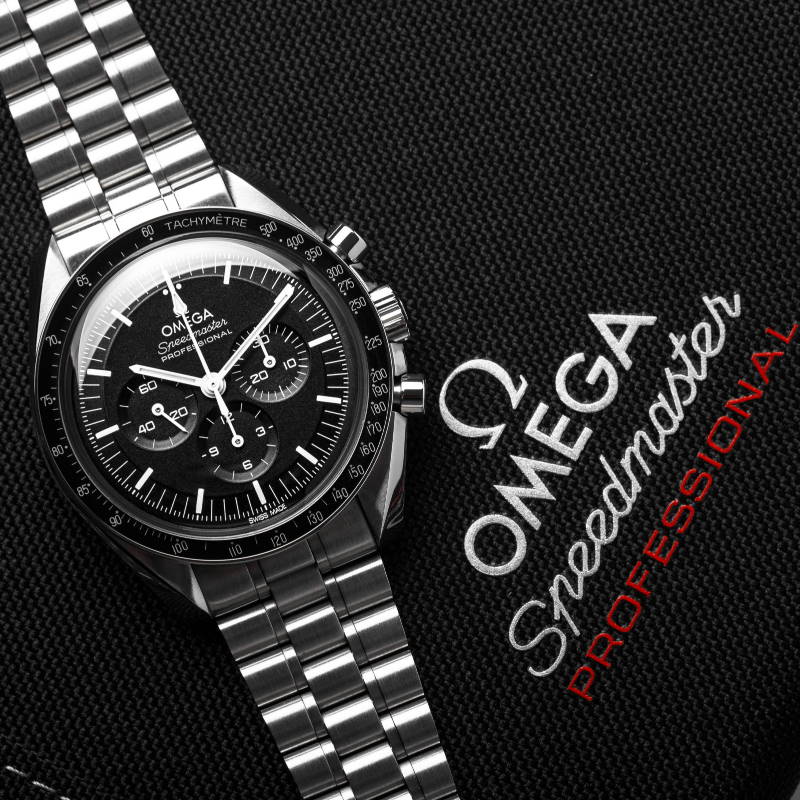 Although until 1968 the model was equated with the caliber 321, today the watch incorporates the OMEGA caliber 3861, as well as a 42 mm case that stands out compared to the 39 mm of the previous original version. 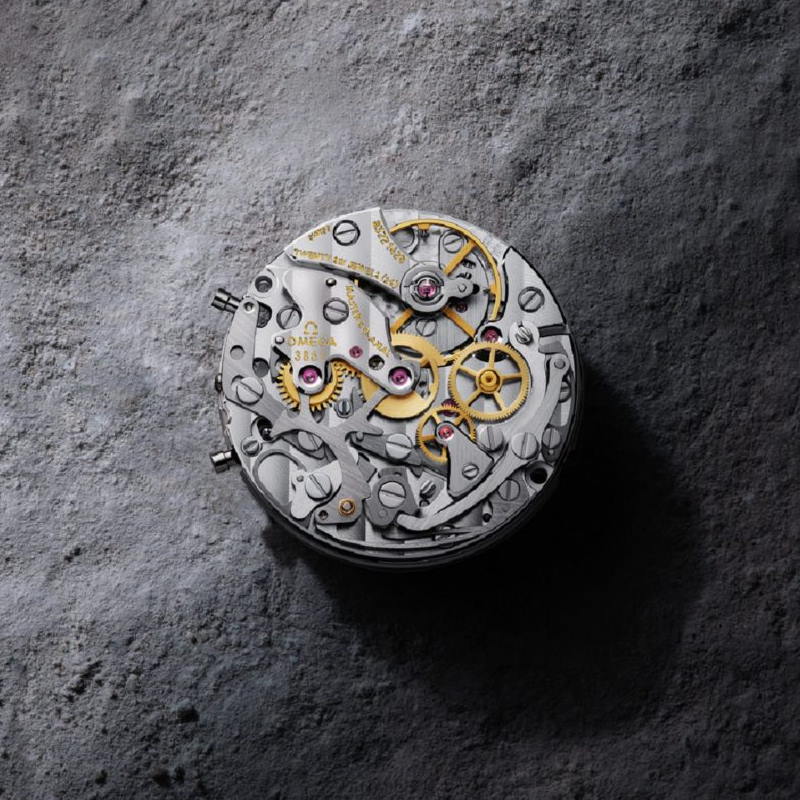 The current chronograph, which features a manual winding movement with Co-Axial escapement, has been certified as a Master Chronometer approved by the METAS laboratory, and can withstand magnetic fields of up to 15,000 gauss. In addition, it has a rhodium finish, bridges with ‘Côtes de Genève’ decoration, an incredible 50-hour power reserve, and guarantees a water resistance of 50 meters. 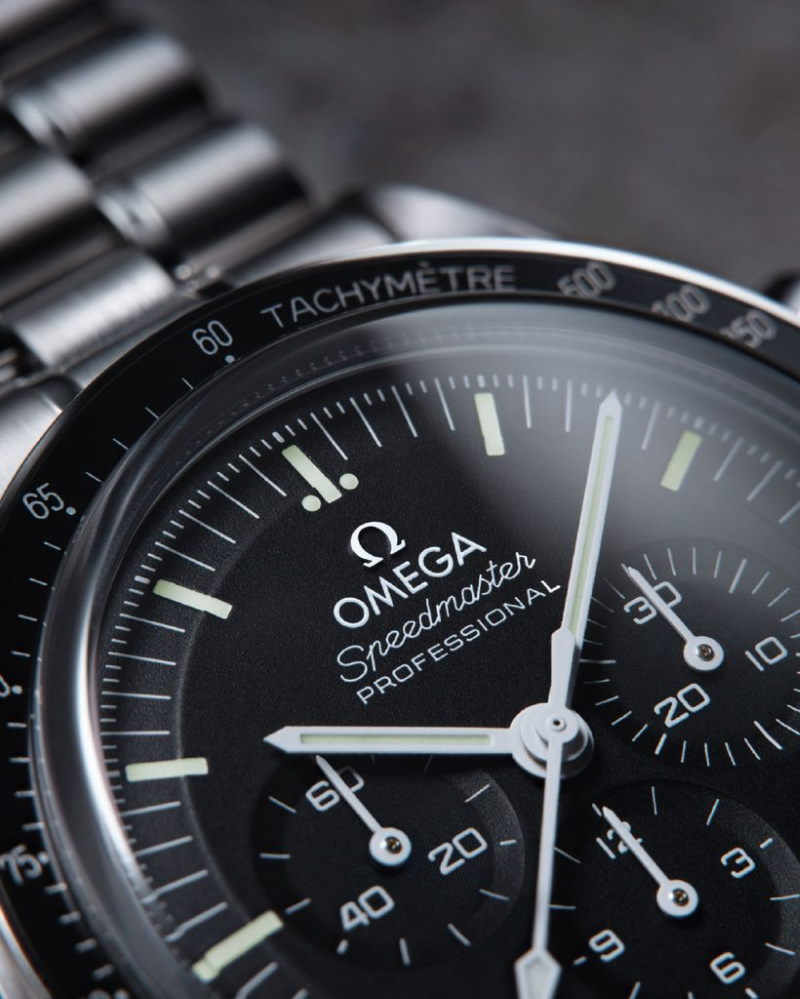 Neither aesthetically nor mechanically leaves the Speedmaster Moonwatch Professional to anyone indifferent. Featuring a deep black chamfered dial protected by hesalite crystal with the OMEGA logo in the center, and an embossed Hippocampus medallion on the caseback. 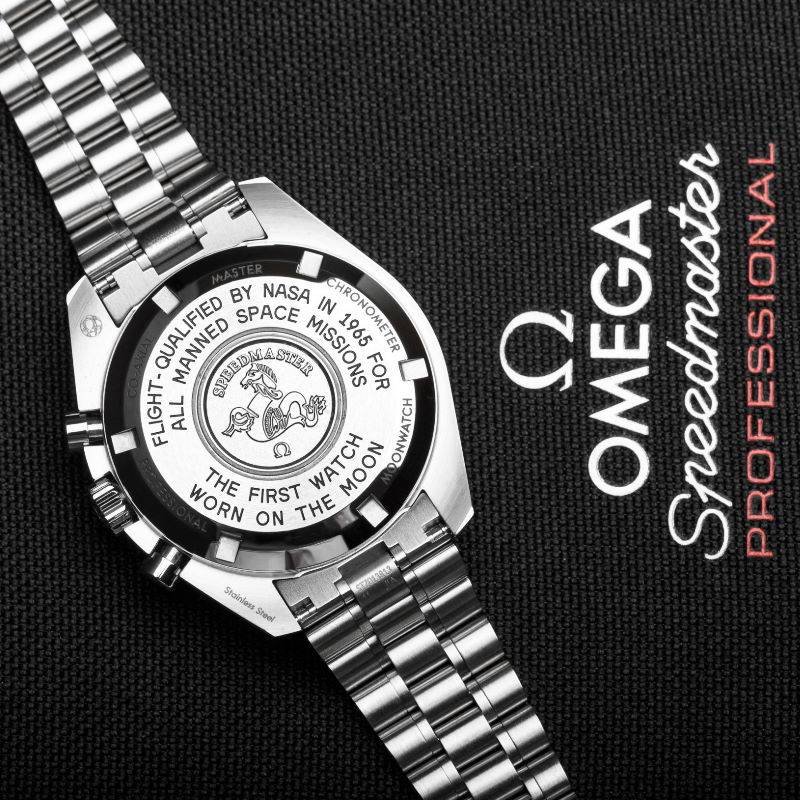 The chronograph ends up showing off with a small second on the sub-dial, a 30-minute counter and a 12-hour counter. Although of course, it also has its key central chronograph function. 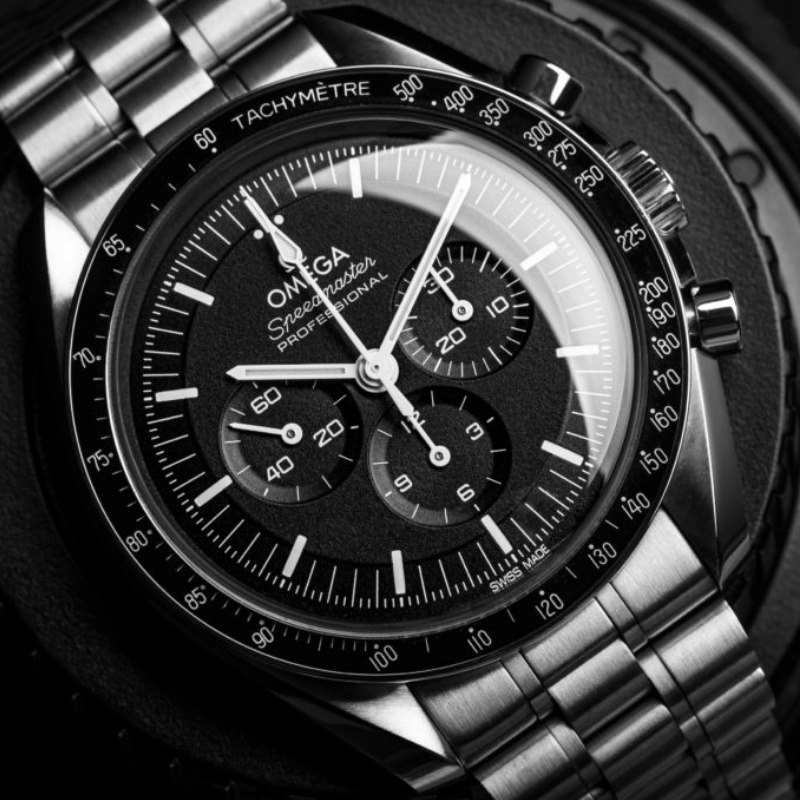 For its part, the black bezel, which includes a tachymeter scale, is attached to an asymmetric steel case that can be accompanied by a fully brushed stainless steel bracelet, consisting of five convex links per row, or a nylon fabric bracelet. coated. 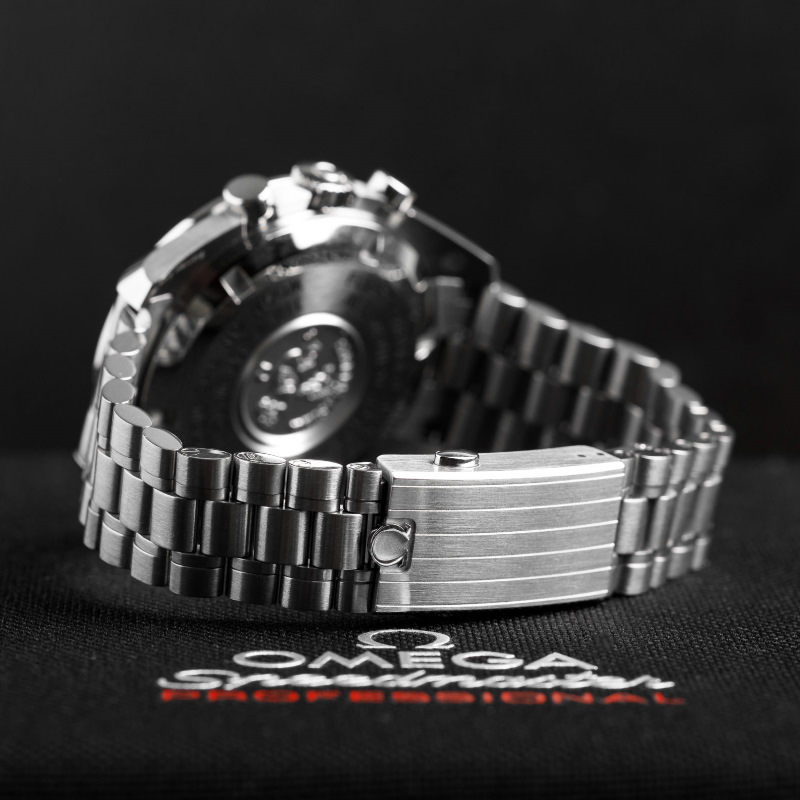 Of course, it is difficult to choose its finish with one bracelet or another, since the model, inspired by the fourth generation of the Speedmaster style used on the Moon, is a gem with both. But one thing is clear, and that is whoever is chosen, the Speedmaster Moonwatch Professional has been, is, and will be, a great 'tick' for humanity.