In 1970, OMEGA received the coveted “Silver Snoopy Award” from the astronauts at NASA, recognising the brand’s unique contributions to space exploration, as well as the Speedmaster’s vital support during the rescue of Apollo 13.

Exactly 50 years later, a special timepiece has been created in the occasion’s honour. Combining animation with watchmaking art, this incredible Snoopy tribute has taken the OMEGA Speedmaster to new realms of design. 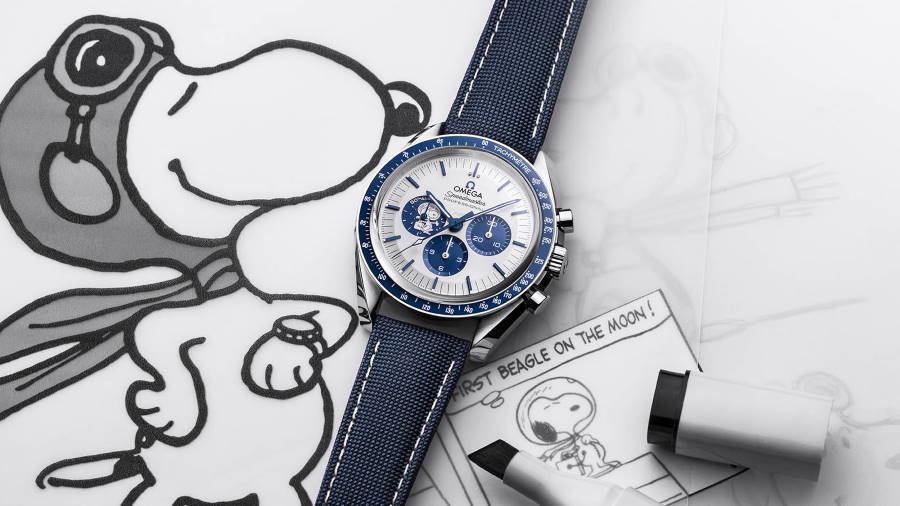 Our favourite beagle plays a prominent role within the timepiece, first appearing as an embossed silver medallion on the blue subdial at 9 o’clock. Here, he is shown wearing his famous spacesuit, in the exact style of the silver pin that NASA astronauts give to award recipients. 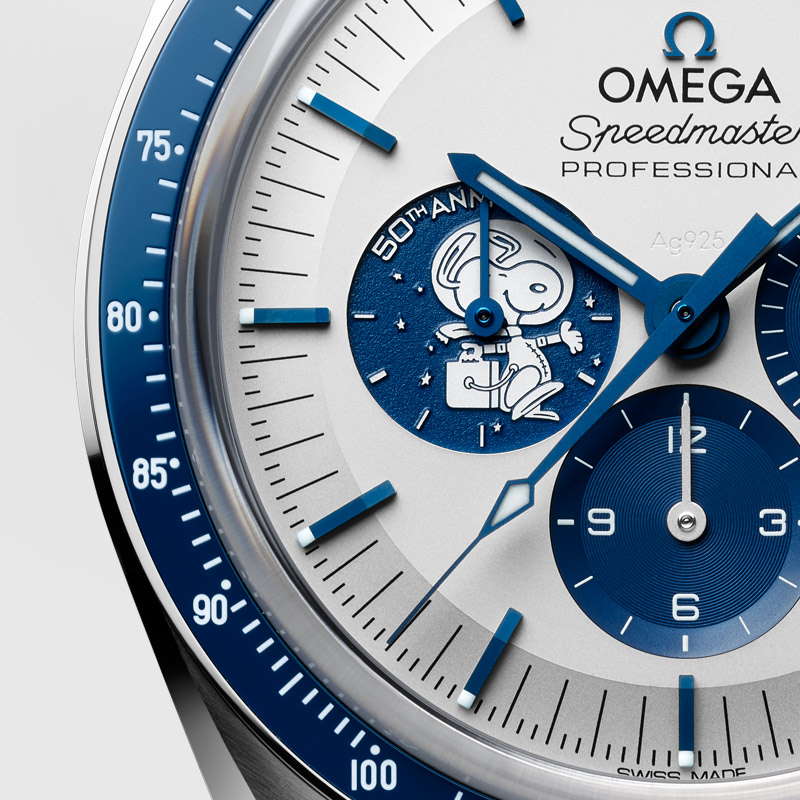 The dial itself is also silver and laser-engraved with Ag925. It includes two more blue subdials, as well as blue PVD angle-shaped hour markers and hands. 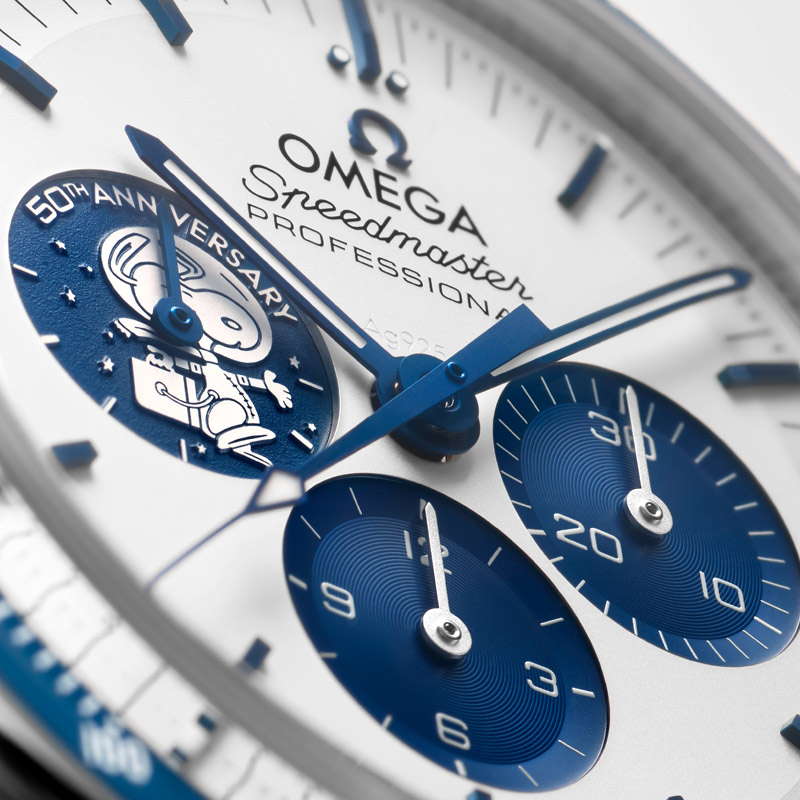 On the caseback, the fun really begins! This time, Snoopy has gone into orbit, thanks to his animated black and white Command and Service Module (CSM) on a magical hand. When the chronograph seconds hand is in use, Snoopy takes a trip around the mysterious far side of the moon – just like the Apollo 13 crew – with the lunar surface being decorated on the sapphire crystal using a unique micro-structured metallisation. 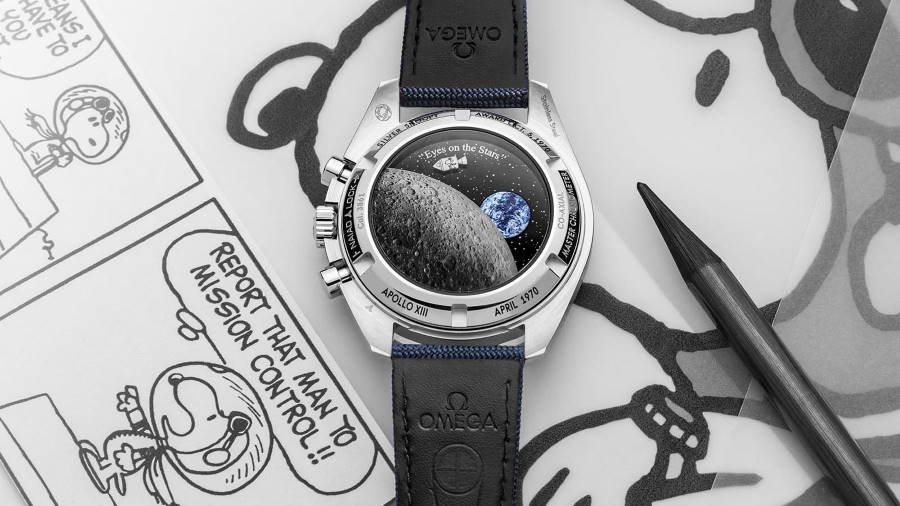 In the distance, a vision of our home is included. This Earth disc rotates once per minute, in sync with the watch’s small seconds hand, and symbolises the precise rotation of the Earth. The iconic quote, “Eyes on the Stars”, is included within the black universe.

The NAIAD LOCK keeps all caseback engravings in the correct, upright position, including the date in 1970 that OMEGA received the Silver Snoopy Award, as well as a tribute to the imperilled Apollo 13 mission that same year.

Showing OMEGA’s superb attention to detail, the watch’s blue nylon fabric strap matches the other blue elements of the watch, and even features the trajectory of the Apollo 13 mission, embossed on the lining.

This strap is attached to a 42 mm case in stainless steel, which is inspired by the 4th generation Speedmaster style (the first watch worn on the moon in 1969). The tachymeter scale, with the iconic “Dot over Ninety”, is shown in white enamel on a blue ceramic [ZrO2] bezel ring. 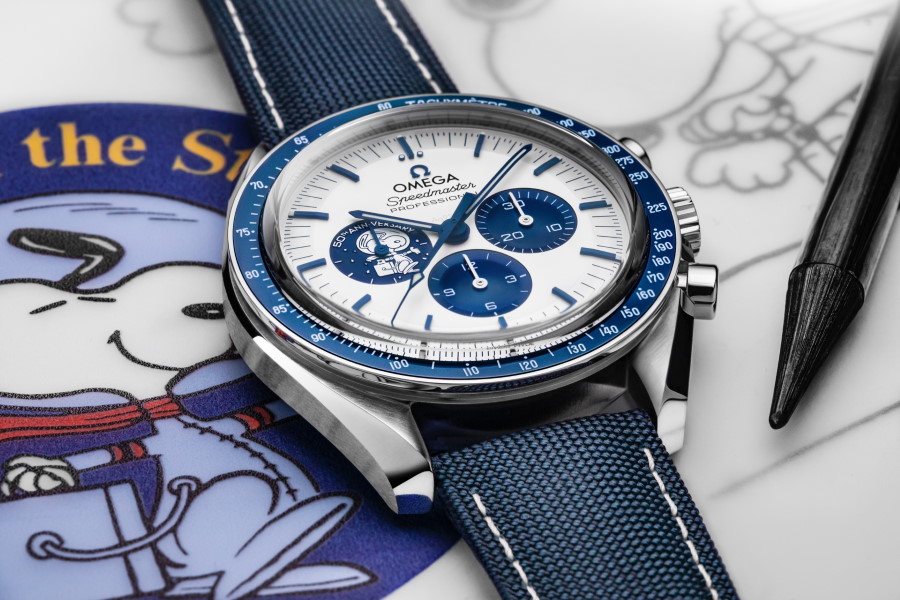 In a superb display of watchmaking skill, the Speedmaster “Silver Snoopy Award” 50th Anniversary watch is driven by the OMEGA Co-Axial Master Chronometer Calibre 3861. This ground-breaking movement has taken the legendary Moonwatch calibre to new standards of excellence, with anti-magnetic innovation, as well as Master Chronometer certification from the Swiss Federal Institute of Metrology (METAS).

The timepiece comes with OMEGA’s full 5-year warranty, and will not be a limited production. Eager fans will receive the watch in its own Apollo 13 presentation box, with a microfiber cleaning cloth, a brochure, and a magnifying glass to help you get up close to the details.

The special connection between Snoopy and NASA first started in the 1960s, when Charles M. Schulz began creating comic strips depicting the lovable dog on the moon. Those animations captured public excitement about America’s adventures into space, and established Snoopy as a symbol of exploration.

In 1968, when NASA went in search of a “face” for its safety programme, Snoopy was the obvious choice. Not only would he act as a safety “watchdog”, but he represented total mission success, while also keeping things light in serious situations. 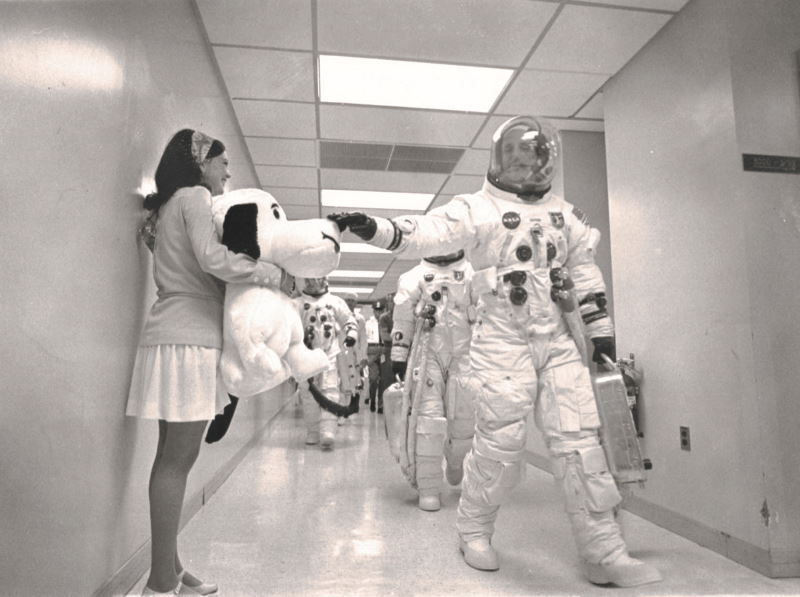 In fact, Snoopy became so beloved by NASA’s own astronauts, that they created a very prestigious prize in his name. Designed by Charles M. Schulz, the Silver Snoopy Award depicts the beagle in a spacesuit and wearing his famous Flying Ace scarf. 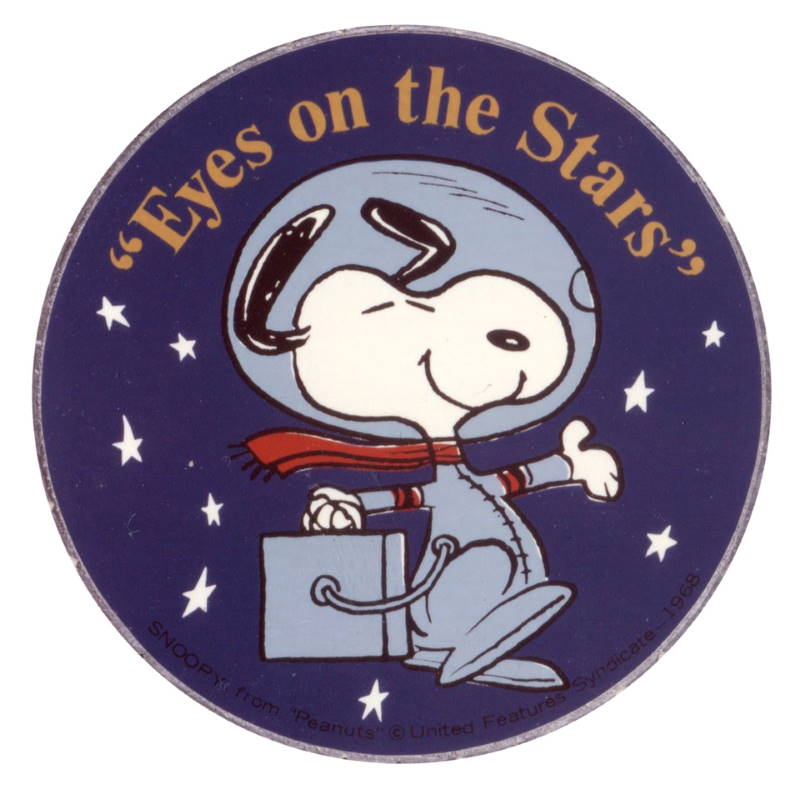 The award is presented by the astronauts themselves, and is given to people or companies who they believe have contributed significantly to “the success of human space flight missions.” To be personally recognised by the flight crews in such a way is considered to be a highly esteemed honour within the industry. Since 1968, it has been given to no more than 1% of eligible recipients, proving just how rare and special it is.

So how did OMEGA come to receive such an illustrious honour in 1970?

The Swiss watchmaker had been an invaluable support to NASA ever since the OMEGA Speedmaster was declared, “flight qualified for all manned space missions” in 1965. The chronograph was subsequently trusted by all the astronauts throughout some of their most important hours, and even became the first watch worn on the moon in 1969.

But it was the Apollo 13 mission, in 1970, which best represents OMEGA’s critical precision, and the “safety” that Snoopy was entrusted with.

When an oxygen tank exploded on board, just two days after launch, the crew was quickly moved into the Lunar Module. This craft, however, was not built to support so many people for such a long time. Therefore, to conserve energy, the astronauts shut down nearly all power – rendering their digital timers obsolete.

Apollo 13 faced many serious challenges over the next several days, as NASA worked around the clock to overcome the increasingly volatile situation. It was at the final stages, however, when OMEGA’s mechanical excellence was called for. Because the mission had drifted off its intended course, it meant that the module would re-enter Earth’s atmosphere at the wrong angle, and bounce back into space with no chance of recovery. Therefore, to manually readjust the course of the craft, an exact 14-second burn of the engine was required.

There was simply no room for error. Without their digital timers, the crew led by Commander James Lovell, instead used their OMEGA Speedmaster chronographs to time the burn. To huge relief, the manoevre worked perfectly, and finally, on April 17th, Apollo 13 splashed safely back to Earth.

In recognition of its overall contributions, including that remarkable mission, OMEGA received its Silver Snoopy Award on Monday, October 5th, 1970. The unique 925 sterling silver pin was presented by the astronaut Thomas P. Stafford, Commander of Apollo 10, together with a Manned Flight Awareness certificate signed by the crew of Apollo 13, including James Lovell, Jack Swigert and Fred Haise. 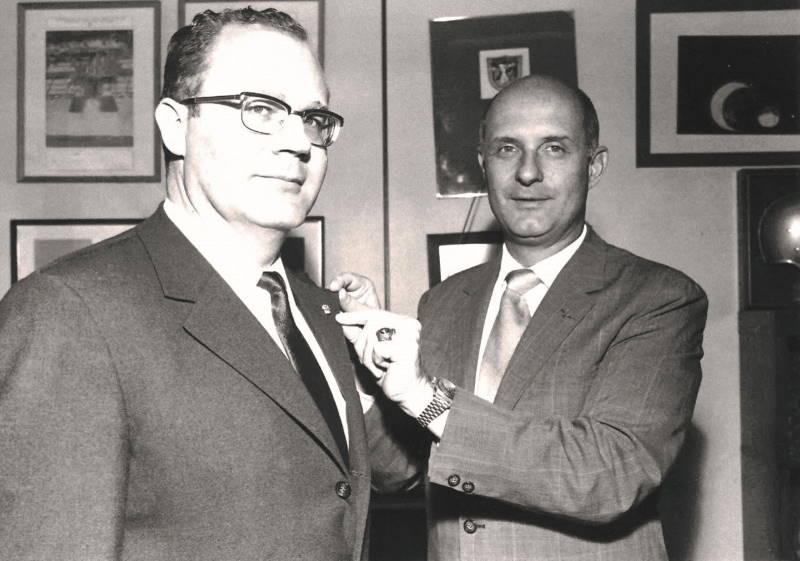 From that moment, the Snoopy and OMEGA stories were forever entwined, and the two have forever shared a special journey through the years – and the stars.

Memories from the Astronauts

On the 50th anniversary of Apollo 13 and OMEGA’s “Silver Snoopy Award”, we spoke with two of the astronauts who remember those moments best.

Captain James Lovell, Commander of Apollo 13; and Lieutenant General Thomas Stafford, who flew on four NASA missions and presented OMEGA with its prestigious prize in 1970.

This year marks 50 years since the safe return of Apollo 13. What emotions or memories has the milestone brought back?

James Lovell: Over the years, I’ve kept on thinking about Apollo 13 as a great example of teamwork, particularly between Mission Control and the flight crew. I can still remember the sudden explosion on board, and that feeling of successfully landing in the ocean.

Thomas Stafford: I remember presenting the Snoopy award to Dr. Widmer from OMEGA at a little ceremony in my office. I thanked him and OMEGA watches for the wonderful service they’d given us throughout the space programme, but particularly on Apollo 13, because the Speedmaster was so critical in helping us get safely back to the Earth.

How important was the OMEGA Speedmaster to the Apollo 13 mission?

James Lovell: When the spacecraft clocks stopped, that’s when we required the Speedmaster. Without our normal navigation equipment, we had to view the Earth and use it as a guideline. Then we had to burn the engine for 14 seconds and turn it off, so we used the watch that Jack Swigert wore.

Thomas Stafford: The Speedmaster meant mission failure or success, because we didn’t have electrical power to turn on timers or computers. So all we had was just the watch. For so many seconds, they would thrust on that descent engine. It was OMEGA that got them back, and for that it was decided that they should receive a Silver Snoopy Award.

What are your memories of Snoopy at NASA? Was he a favourite mascot amongst the astronauts?

James Lovell: Snoopy was real a cartoon favorite who kept showing up in the comic strips wearing a spacesuit. I think the astronauts adopted him because he just did everything right.

What did the “Silver Snoopy Award” come to represent, and how special is it?

James Lovell: The astronauts adopted the award as a way to really recognise the events and actions that worked well.

Thomas Stafford: If somebody really did something outstanding, really helped in the safety of the overall mission, they would possibly be awarded a little Silver Snoopy pin. They weren’t handed out very often. It was a rare thing. So if you had a Silver Snoopy, it meant that you had done something really outstanding to help the programme. Usually an astronaut awards it, because it’s their life that’s on the line.

Looking back, how important has OMEGA’s contribution to the space programme been?

James Lovell: Quite simply, OMEGA was an essential part to a successful mission.

Thomas Stafford: OMEGA was just an integral part of our total effort in space. When you’re in space, your baseline is time. Everything is based on time. We loved the professional Speedmaster. It worked good. Never failed. It was always just there ready to go.